Home | Commodities | Where Next for Silver?
Commentary

Where Next for Silver?

The rise and fall of the silver price this year had much more to do with speculative exuberance than any fundamental change in supply or demand. With a foot in both the industrial and investment markets, silver has always lived a dual life. Either pulled up or depressed by a rising or falling gold price and likewise supported by improving global macro economic trends suggesting industrial demand improvement. Sometimes this pushes silver counter cyclically to gold. Occasionally both factors coincide to encourage a high level of speculative interest in the metal. 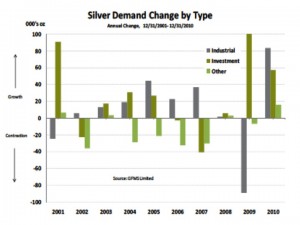 This scenario occurred in the run up to silver’s $50 peak in late April. In 2009, investment demand soared but industrial demand plummeted. Last year both industrial and investment demand coincided. Speculators thought a bonanza at hand what with silver supply from mines and scrap sales growing only slowly, on average 2% and 4% respectively. And that bonanza existed for a while, but reality kicked in as the gold-silver ratio pushed 31.   Would a correction ensue? 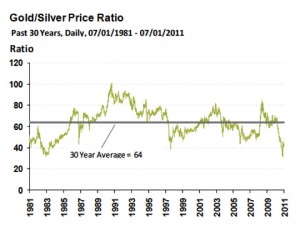 The current ratio around 40-45 seems reasonable with industrial demand gradually recovering and with elevated gold prices making silver a more attractive metal for the small investor to hold. Bloomberg reports Australian Mint sales hit a record with the rising silver price. The FT reports the UK’s Royal Mint has seen the same surge in sales, as have other mints around the world. And India’s state trading company, MMTC announced in Reuters it will almost double its silver purchases this fiscal year to 1,500 tons. On average, India buys some 4,000 tons of silver per year. If MMTC double their purchases the more ‘fleet of foot’ private importers will do so likewise. A portion of this will go into jewelry which along with photographic use has trending lower over the last ten years. But in India demand remains strong particularly as the price increased. Silver became a more desirable store of value.

In addition, Exchange Traded Funds have sucked up considerable quantities of physical silver this year. Following the Comex silver restriction based sell off in May, many sold their ETF position but since that time, have made a comeback in late June-July.

Going forward much will depend on some key issues. First, perceptions of industrial growth both in China and the west. China, currently undergoing progressively tighter credit conditions in an effort to stifle inflation but has just posted some impressive export numbers suggesting the economy remains far from constrained by steps taken so far. In the west, recent PMI numbers suggest European manufacturing demand may slow. Naturally enough the Silver Institute appears very optimistic. They predict industrial demand for silver will increase to 666 million ounces by 2015, a 36% increase from 487 million ounces in 2010. In addition, much will depend on Asia and global growth generally. Second, the strength of the US dollar, which as the European debt crisis has worsened over recent days has strengthened considerably. Gold has reached record highs in Euros and Pounds but remains off peaks in dollars because of the currency’s relative strength. We see that unlikely to continue unless the European situation deteriorates further. Finally inflation which has remained benign in most mature markets has become a problem in many developing ones. If inflation fears surface in developed markets, expect gold and silver to move higher again.

We have never considered ourselves bullish on precious metals, as we tend to prefer markets that move based on more solid supply demand fundamentals and less on speculative pressures such as inflation or currency hedges. But short term volatility aside, we would leave readers with the view that for silver to reach the heady heights it scaled in April it swung to an unprecedented gold-silver ratio of 31. At a more comfortable ratio around 40 gold would have to hit over $2000/oz for silver to see $50 again.