Federal Reserve and Commodity Markets At Odds For 2012

There seems to be a fundamental (and disturbing) disconnect between the official Federal Reserve predictions for the economy and those of the markets, according to an article in Reuters last week.

Federal Reserve Chairman Ben Bernanke is basing his hope for faster growth on a leveling-out of oil and commodity prices, suggesting rising gasoline prices as the No. 1 factor causing the softening in growth during Q2 this year; officials at the Bank of England put forward the same proposition on the UK economy.

Indeed, with interest rates near zero, the Fed has little room left to maneuver apart from further quantitative easing, which seems unlikely at the moment. The Fed’s position seems to be that austerity measures will give longer-term confidence in the economy and stimulate investment, while stable oil and commodity prices will become normalized in the economy such that the softening in Q2 will be temporary.

Some of the banks agree on price stability going forward. Barclays Capital predicts Brent crude will average $112 per barrel in 2011 as a whole, unchanged from the $111.60 we’ve seen in the first half; and slightly more bullish Goldman Sachs predicts $130 within 12 months — but as a price point, not an average. The Fed is suggesting oil prices will move no more than +/-10 percent from current levels, yet history suggests anything but. 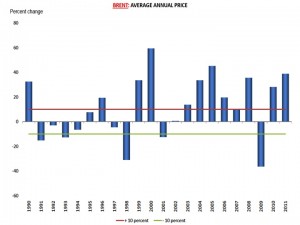 Volatility has been the order of the day for years and with so much uncertainty on both political (think Middle East) and economic (think Euro sovereign debt) fronts, it seems unlikely stability will suddenly break out.

As the article puts it, the Fed is hoping for a kind of Goldilocks outcome. The intriguing counter point is that the markets largely disagree with what is in store for commodity prices. The article explains that high open interest in oil-linked futures and options contracts suggests an unusually wide range of views at present, with at least some market participants expecting prices to rise far higher than this.

Hedge funds and other money managers still have net long positions in WTI-linked futures and options amounting to 203 million barrels of oil, and another 67 million barrels of Brent-linked derivatives. The paper believes it is unlikely they would run such a big position if they expected prices to be flat or increase no more than 10 percent over the coming 12-24 months.

Although metals prices have come off since April highs, many expect them to pick up again towards year-end, while agricultural commodity prices are driven more by weather patterns; but they also have a correlation to oil prices, suggesting if oil does rise, agricultural prices could move too. That’s not good news on a number of fronts.

Accepting Mr. Bernanke’s model, rising gasoline and food prices would prolong the Q2 soft patch, extending the downturn into next year, but the impact on the Asia could be worse. Economies already battling inflation like China’s appear to be making some headway in the current, more benign commodity price environment; if prices start to rise again, the China tightening may well be extended. Inflation in China is not all about house building — food and energy prices have been a significant factor as well.

It is difficult to see an outcome for next year that has rising commodity prices and rising Western world growth. The former would do much to negate the latter if the Fed’s models are correct.

PREVIOUS POST:
China Slowing – But Only Slightly
NEXT POST:
Made In America: Buying Criteria for Infrastructure Projects