With all the “halftime reports flying around on how commodities fared in the first half of 2011, we thought we’d weigh in and at least try to sort out what’s what both on metals fundamentals or speculative market trends. While we’re not setting out to provide an absolutely comprehensive commodity report here, we’ll try to hit a few past highlights/lowlights and a few signals pointing to future activity.

A number of folks have provided overviews of the first half of the year. From an investment side, ETF Securities put in its two cents on what happened to the commodities market in the past six months, which can be summed up by what senior analyst Daniel Wills had to say on the industrial metal sphere.

“Of all the commodity groupings, industrial metals were the hardest hit by the succession of shocks we’ve seen in terms of macroeconomic uncertainties, he said during a conference call. “The combination of the higher energy prices, Japan damage to the supply chain, near term and spillover worries regarding European debt has led industrial metals substantially lower, he continued.

But does investment activity reflect the fundamental structure of metals supply and demand? And will the drops in industrial metal portfolios necessarily mean a falloff in metal prices?

Likely not, if we’re to look at a few key metals and indicators.

Let’s first glance at Dr. Copper, the metal that often indicates where the markets are headed essentially, whether headaches or sighs of relief could be in store. To put things in perspective, here’s a graph courtesy of John Gross, a leading independent copper analyst: 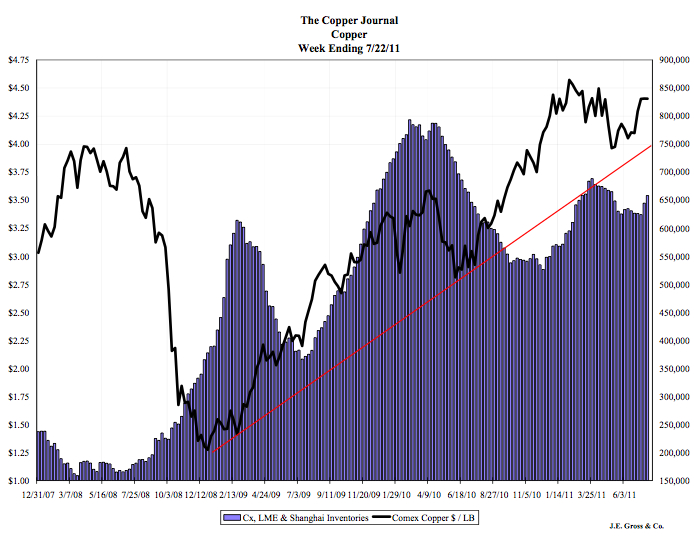 To put it simply, fundamentals are still supporting copper, as inventories remain low. Copper reached an all-time high in 2011, breaking the $10,000/ton barrier. Developing world demand should buoy the copper price well into the second half of 2011, as Eurozone worries and the US debt crisis should only temporarily cause investors to hiccup and lower the copper price.

Some analysts such as Benjamin Westmore, a commodity economist at National Australia Bank, disagree. “With current base metal prices already reflecting strong growth prospects for the emerging economies, we expect macroeconomic developments in the US and euro area to be increasingly important,” he was quoted by Reuters as saying.

However, a statistic may be worth many an analyst’s words: China’s copper imports, after two months of decline, rose again by 9.9 percent in June. While we’re by no means super-bullish, copper shouldn’t be tanking anytime soon if at all.

For the continued commodity outlook, check in later for Part Two.