Escondida Strike Is Not Yet the Cause of Copper Prise Rises

An article this week in the Financial Times suggests the current rise in copper prices is a result of growing concerns about the ongoing strike at the Escondida copper mine in the Atacama desert in Chile. The suggestion is the Escondida strike, which is entering its sixth day, is raising fears of supply shortages.

Escondida is certainly the most important copper mine in the world, producing some 7 percent of the global total of mined copper and being the cornerstone of Chile’s production. A prolonged and/or successful strike at Escondida could promote copy-cat strikes at the mines of other mining companies such as Rio Tinto, Xstrata, Anglo American and Freeport-McMoRan looking to match whatever wage enhancements the mines achieve.

Chile produces some 30 percent of the world’s total mined copper, so widespread disruption would have a significant impact. But these industrial disputes tend to be of relatively short duration and, as important as Escondida is to global supply, the mine owners, principally BHP with 57.5 percent and Rio with 30 percent, are not going to allow it to run for too long.

The reality is that recent copper price rises (see chart courtesy of the LME below) have more to do with dollar weakness than fears about supply. 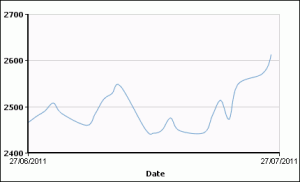 The strike is providing some background support, but as yet there are no panics about supply.

The copper price is, and has been for some months, locked into a trend driven by Chinese destocking and restocking cycles and money supply. The Chinese are very price-sensitive stepping into the market as prices fall and holding back as they rise, preferring to live off inventory or scrap. This is much the same pattern we saw prior to the massive re-stocking program after the Lehman crisis.

Back in the middle of the decade, copper traded between $6,500 to $8,500 per metric ton, but the current trend is likely to be the $8,500 to $10,500 range. Copper hit an all-time high of $10,190 a ton in February, but it would take solid Chinese buying, which is unlikely this year, or a collapse of the dollar to see it scale those levels again in the next few months.