Home | Commodities | Ferrochrome – Up or Down?
Commentary, Market Analysis

Ferrochrome – Up or Down?

Arguably, both metals share a chicken-and-egg relationship with stainless alloys; currently weak demand for stainless steels is having a depressing effect on both nickel and chrome prices. In the case of chrome, it is most commonly as ferrochrome, and that alloy finds itself caught between weaker market prices and rising cost inputs which, according to HSBC in a recent report, should provide a floor under the price in the medium-to-longer term.

Like aluminum, zinc and one or two other metals, power costs largely drive ferrochrome’s cost base. Much of the world’s supply comes from South Africa, where power constraints continue to provide a drag on supply growth see the following graph from HSBC and Thomson Financial Datastream: 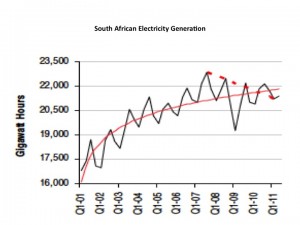 Utilization rates in South Africa are low by historic standards and new power supply is a medium-to-long term proposition to rectify. Meanwhile, various other sources are providing some incremental increases in supply, notably Kazakhstan, Russia and India, but most of them will not be until about 2013.

To what extent falling surcharges (which encourage the supply chain to destock) forced stainless production and hence ferrochrome and nickel demand to fall is debatable, but as the s/c trails the metals prices, we can probably say it has a significant bearing. The second-quarter fall in demand notwithstanding, the bank sees growth in 2010 continuing to rise 8 percent in the US, 7 percent in Europe and 12 percent in China this year. Over the next five years, HSBC predicts demand to outstrip supply growth 6.6 percent to 6.1 percent, supporting price rises through 2013, as illustrated in the following graph. 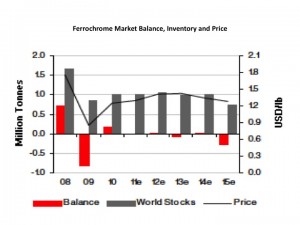 Medium-term supply constraints are expected to raise the price to $1.42/lb by 2013, before rising supply options allow prices to ease through to the middle of the decade.

As with so much else in the metals world, much on the demand side will depend on China. The country is a major producer at 615,000 tons in Q2 this year out of a global 2,295,000 tons or 27 percent. But China is an even more significant consumer at 1,014,000 tons out of a global 2,225,000 tons in Q2 46 percent. With growth expected to be 12 percent this year, that percentage will likely rise and so will China’s contribution to the demand side.

On the supply side, the country has new production facilities coming on stream, but with high power costs in the country China is not a natural choice as a ferrochrome producer. Their high power costs will continue to provide support to prices worldwide, as they do for aluminum.

PREVIOUS POST:
Forget the Debt Ceiling – Why The House That Washington Built Shouldn't Be Remodeled
NEXT POST:
Why Do US Steel Producers Need to Pay Attention to Downstream Imports?