Home | Commodities | In a Bullish Metals Market, No Love For the Physical Aluminum ETF
Market Analysis

In a Bullish Metals Market, No Love For the Physical Aluminum ETF

So many issues in the global economy are colliding that conditions may be ripe for a perfect commodity firestorm.

Europe continues to battle its deeply mired sovereign debt problems; the Middle East crackdowns seen in Syria of late are worrisome for a region primarily paid attention to for its oil; and the still-largest economy in the world has seen a protracted struggle between its two beleaguered political parties over how much more debt the country can afford. (“Sure, the primary season is months away, but who cares? Hope you enjoyed this pre-election-year spectacle, folks!)

Because of all this, gold is the highest it’s ever been. Safe-haven precious metals are spurring investment interest, as they tend to do when currencies are in danger of diving. Exposure to physical gold, silver and others through ETFs is equally hot. But what about physically backed industrial-metal ETFs?

With all the media coverage on how the LME is handling the situation with its certified warehouses in Detroit, it’s hard not to keep our focus trained on the metal. ETF Securities released an aluminum ETF back in early May, and, interestingly, since then, only 2 warrants have been created, according to the ETFS daily-updated warrant list. The first deposit was made on May 3, and the second on June 13; no activity since then. (One warrant of LME aluminum equals 25 tons.)

As we began looking at the other five industrial metal products, we noticed a falling-off in activity the past two to three months: 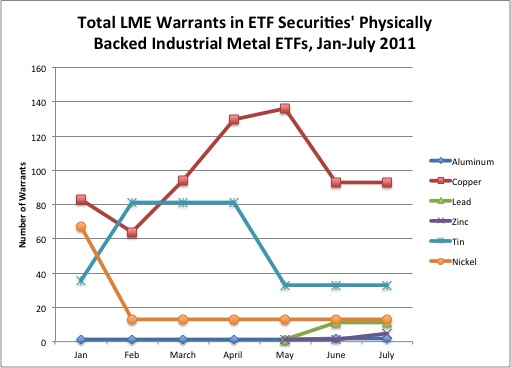 Although the copper and tin ETPs each saw increased inflows in the beginning of the year, pretty much all metals have seen virtually no activity since May. (Forty-two warrants of copper were withdrawn from May to June.)

Yet investors have shown the least interest in aluminum overall.   Also, interestingly, one of the two aluminum warrants in the ETP is housed in a warehouse in Detroit.

So this begs the questions: does the Detroit warehouse debacle have any direct correlation with the interest (or, rather, lack of interest) in the aluminum ETF? And are ETFs in general an alternate option for metal buyers to hedge their price risk in a volatile commodities market?

No and no, according to Townsend Lansing, the London-based head of product development at ETF Securities, which offers some of the oldest and most extensive physically backed metal funds.

MetalMiner spoke with Lansing to try and get to the bottom of the aluminum issue. While he declined to delve into the process by which ETF Securities acquires metal from the LME that goes into the ETP contracts due to confidentiality concerns, he did say that since the primary investors are not buyers or producers, but rather folks simply with a desire for exposure to the metal. Therefore, he said, the inventory bottlenecks are “not something that would necessarily affect us.”

The impacts are on the premiums as opposed to the LME spot price, Lansing said. He also said that the ETFs are focused on acquiring LME warrants, and whether warrants are created, traded or decreased, the metal itself won’t be moving out of warehouses into the investor’s physical possession.

“ETCs (exchange-traded commodities) would not provide additional benefits it wouldn’t make sense from the buyers’ perspective, since they will continue to buy directly from producers in existing bilateral arrangements, Lansing said. Physically backed metal ETPs may only make sense for investors choosing between that and futures. If the contango curve is steep enough, then the roll costs for a futures contract would be higher, he said.

In other words, there is no play for metal buyers in the physically backed sphere since the ETFs deal with LME warrants if industrial buyers wanted to circumvent the LME for their metal, they’d be better served to “move off-exchange.”

So if the warehousing issue doesn’t impinge on the ETF flows, what is to blame for the lack of investor interest in the aluminum ETF? Our guess would be that the combination of oversupply and relative inexpensiveness of the light metal is preventing investors from buying up those warrants. The sheer tonnage of aluminum one must amass to equal the relative value of precious metals or other scarcer base metals likely serves as a turnoff.

The number of held warrants in ETFS’ industrial metal funds, ultimately, seems proportional to the market value of the metal. To boot, the disinterest in the aluminum product owes itself to proportionally higher warehouse rent for storage, according to Lansing. Perhaps if aluminum (hanging out in the $2,000 to $2,500 range the past six months) traded in the range of copper or tin (in the $10,000/ton range), it would be a different story.