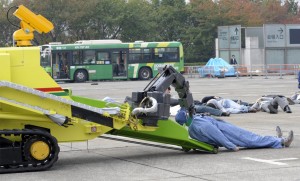 I came across a press release the other day for a mining automation conference in South Africa.

Well, I thought that too, but as I drilled down and did a bit of follow-up reading, some major issues presented themselves and led to big questions. This is the sentence in the release (especially the final phrase) that got me thinking:

“The lack of skilled mining professionals is likely to be the one of the key drivers in next generation mining with mine workers trading in their steel-toed boots for a headset and computer mouse as leading mining companies embrace mine automation to help solve their labour shortages and ramp up output.

Here’s one question that we can explore in a For/Against format (like the one seen in the Economist’s digital pages):

Should investments in automated mining technology especially in Africa come at the expense of teaching and employing more workers? (i.e will automated technology “solve labor shortages as the quote above claims?)

Of course, this is a rather cursory and perhaps naive argument and one that will receive deeper investigation as these technologies become more common but what do you think?

Where do you stand on mining automation? For or against? Is it a good thing or bad?