The US car industry has certainly bounced back.

Washed clean of massive debts and supported by some $60 billion of government money, two of the Big Three have successfully reorganized themselves into a very different industry from the last decade. More fleet of foot, Ford managed it, just on their own.

Whether for reasons to ensure the industry’s long-term prosperity or to reduce the country’s balance of payments, the government is now imposing tough fuel efficiency standards. By 2025 US car-makers will have to get 54.5 miles per gallon, on average, from their fleets, about twice the current level. As the Economist points out, if tougher standards had been set back in the 90s, arguably the Big Three would have been better able to cope with a competitive range of vehicles in the early part of this century; but that rather overlooks the host of other problems GM, Chrysler and (to a lesser extent) Ford were carrying into 2008.

The EPA champions the tougher standards, and it says, “Together, they will save American families $1.7 trillion dollars in fuel costs, and by 2025 result in an average fuel savings of over $8,000 per vehicle. Additionally, these programs will dramatically cut the oil we consume, saving a total of 12 billion barrels of oil, and by 2025 reduce oil consumption by 2.2 millions barrels a dayâ€as much as half of the oil we import from OPEC every day. The standards also curb carbon pollution, cutting more than 6 billion metric tons of greenhouse gas over the life of the programâ€more than the amount of carbon dioxide emitted by the United States last year.

All this may sound like meddlesome big government, but if there is one thing the Big Three proved, you cannot trust them to make the long-term strategic decisions necessary for their own survival. They are driven too much by this year’s car sales and the next facelift.

Globally the car industry is facing massive over-capacity. The car industry can produce 94 million cars a year, against global demand of 64 million, according to another Economist article. As the article points out, annual sales growth in China is forecast to fall from 30 percent to around 10 percent from this year as other parts of the country follow Beijing’s move to restrict the number of cars in the city. That will both squeeze Western firms selling into China, but in the medium term it will encourage Chinese manufacturers to look abroad for sales growth. Globally the whole industry needs to rationalize, but with employment and automotive production so closely linked in Europe, it is unlikely much of a dent will be made in the estimated 30 percent over-capacity in that market.

The UAW, bargaining with the Big Three this month, is therefore going to be more about keeping jobs and finding common ground than the confrontation of old. All in labor costs have fallen from $76/hr to something above $50/hr as part of the agreement reached when GM and Chrysler went into Chapter 11. All three firms are now making money before exceptional items, all the more remarkable when you consider the US will buy only some 13 million cars this year against a peak of over 17 million just a few years ago, as this graph produced from data provided by WardsAuto.com shows. 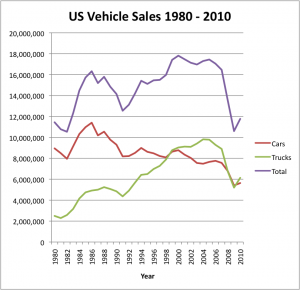 The trend to make fewer cars and to make smaller cars (by extension, more fuel-efficient cars tend to be somewhat smaller) has led to reduced demand for steel and other metals, which is unlikely to come roaring back as the trend to weight saving continues.

But alongside that has been a marked increase in the use of alternative materials, aluminum being a major beneficiary. This will likely accelerate if European experience is anything to go by. Europe trails the US in so many ways, but in automotive design many of today’s trends in the US were started five or ten years ago in Europe or Japan. There, as more recently in the US, government mandate has increasingly set the longer-term agenda for the car industry. Let’s hope they have got enough right to ensure the long-term survival of our major players on both sides of the pond.