An editorial strategist we have previously worked with suggested to us that we might want to include visual cues as to the type of content we write (we took that suggestion, hence the cue “commentary for this piece). But that strategist also tried to defend the fact that the mainstream “press (traditional press) maintains objectivity whereas we bloggers (yes, smarmy as we are) do not. We vehemently disagree (not about the smarmy part, though we like to think we aren’t) but about the traditional press maintaining objectivity (which we find somewhat comical).

As an example, earlier this week two competing newspapers wrote about the same topic taking noticeably different points of view (no, let’s not suggest they are story angles they represent points of view). Let’s start with the New York Times and in particular, this story, From Spending to Cuts, While the Economy Stalls. Let’s pretend that the headline does not contain bias. We’ll juxtapose that story with this one from the Wall Street Journal: Four Ways the Economy Could Grow Or Shrink. Now in all fairness to the New York Times, we acknowledge that the Wall Street Journal also editorializes. But the two stories reflect quite different views on the factors (levers) that impact economic growth.

First we look at the Times story, which I would characterize as a nice yet somewhat random essay covering a range of factors impacting the economy, including 1) the shift from stimulus spending to cuts, 2) lower state and municipal spending impacting employment to 3) Fed policy levers that further stimulate growth beyond what it has already done. The article attempts to address Ëœhow’ the Republicans propose growing the economy by pointing out, “The Republican authors of the debt ceiling deal say that cutting the size of government will increase economic growth down the road because federal borrowing soaks up money otherwise available to private businesses and federal spending distributes that money inefficiently.

The article only makes a one-paragraph reference to GDP and the factors that impact it, citing a University of Chicago professor who said that cutting government spending would decrease growth. Finally the author discusses how companies like Northrop Grumman saw slower second-quarter sales growth due to political uncertainty.

To that last point, we could write an entire follow-up post.

The Wall Street Journal article, on the other hand (and yes, I have a bias here), at least attempted to address several of the elements comprising GDP including consumption, investment, government and trade spending. Readers can draw their own conclusions as to the impact specific policies have on the levers. 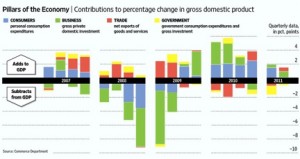 Houston, We’ve Got a Problem

The real problem of course, besides figuring out what lever to press within the GDP equation (we remind readers of those levers here) to stimulate growth involves the timeliness and accuracy of the BEA’s calculation of GDP. While the BEA released its Q2 2011 GDP advance estimate we also saw the BEA give Q1 2011 GDP a very big haircut from 1.9 percent growth to .36 percent growth. And to pour salt on a wound, the BEA revised Q4 2008 (no, that is not a typo) down an additional 2.12 percent to -8.90 percent (!). All of these revisions beg the question what numbers should one look at and for what purpose?

The example, best told to us by Rick Davis, Founder of the Consumer Metrics Institute goes like this: “What if the CFO of Apple came out with an advanced estimate of Q2 earnings, and then 30 days after the quarter, revised those earnings down again and then revised them 35 days later and only to cut them again one more time? What impact would that have on the market? Moreover, Davis went on to say, “some of the panic over the last week has people finally realizing that this recovery was mostly vapor.

In a follow-up post we’ll examine some of the specific economic indicators as well as make sense of some new data that paints a slightly different picture.

PREVIOUS POST:
The (Real or Imagined) Silver Linings in US Manufacturing Slowdown
NEXT POST:
Move Over, U2 – Here Comes the Global Hawk