The (Real or Imagined) Silver Linings in US Manufacturing Slowdown

With the Institute for Supply Management’s (ISM) release of the PMI number this week came a dour outlook for manufacturers. The decrease from 55.3 in June to 50.9 in July signaled a weakening unseen for several months the index had been above 60 the first four months of the year.

The PMI figure is, of course, a key metric of the manufacturing sector’s overall health, but looking a bit farther afield, there may be signs that things aren’t so bad. Even though silver linings are easy to come by, we could look at the relative nature of certain elements in these types of reports, and of the macroeconomic sphere in general (seasonality, economic cycles, unforeseen factors, etc.).

Chad Moutray, the chief economist at NAM, writing on the association’s Shopfloor blog, pointed out a silver lining in the PMI number: it’s still in the growth zone, albeit barely. Numbers higher than 50 indicate growth, and lower than 50 indicate contraction. In other words, it doesn’t necessarily mean manufacturing is in an out-and-out free-fall, or “shifting into neutral as he puts it. Supporting this is the fact that even though the indices for production, supplier deliveries, and employment fell, they also remained over 50, Moutray wrote.

With the government’s hemming and hawing over debt troubles, and many producers worried about what the corporate tax climate will look like in the following year, uncertainty might have the most to do with the equation right now. Investments simply aren’t being made; companies are still squatting on cash piles across the country.

In somewhat related news, a report by Automatic Data Processing (ADP) came out yesterday stating that 114,000 new private-sector jobs were added last month, which exceeded forecasters’ expectations, as reported by the Wall Street Journal. Unfortunately, ADP reported that 1,000 manufacturing jobs were lost in the same time period, but silver lining that sector has experienced a net increase in payrolls over the past five months: 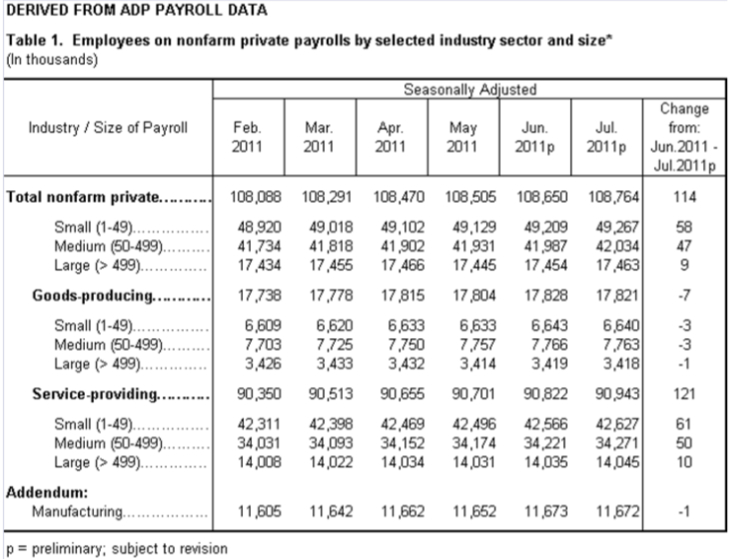 While the 114,000 figure may sound like a drop in a bucket after we consider the number of new jobs needed each month to offset those leaving the workforce it points to where true economic recovery will really begin to take hold: the private sector.

To support that point, consider this: even though the most recent federally released unemployment numbers by the Bureau of Labor Statistics show an increase in the unemployment rate (from 9.1 to 9.2 percent), government employment posted a 39,000-job decrease. This figure also fell by 14,000 the month before. “Employment in both state government and local government continued to trend down over the month and has been falling since the second half of 2008, the BLS reported.

While we hardly wish for a scarcity of any jobs for work seekers, this contrast may portend a healthier overall economy, and perhaps a benefit to the private sector, not to mention a less-bloated government bureaucracy.

Granted, private payroll companies and consultancies that release these reports are no substitute for government figures, only a complement. But this begs the question: how do we ever arrive at the final, official government figures if there are constant revisions, as in the GDP growth numbers? Sometimes final revisions aren’t even final.

Predictions are cheap, and that’s because it’s extremely hard for anyone to make correct ones. But this estimation by NAM’s Moutray may hold the same weight as any official figure or percentage: “Manufacturers have tended to be more optimistic about the next six months than when asked about the current environment, and there have been some positive signs of recovery in the sector which can hopefully bear some fruit.

Is this all hot air or should we be fretting over the state of manufacturing? Tell us what you’re seeing! Post a comment below.