As US politicians put their debt crisis to bed, for the time being at least, all eyes switch to Europe.

The European debt crisis is, in reality, any number of crises depending on which country you are looking at. Collectively it is characterized by the same sense of hopeless political uncertainty, denial and procrastination that is the European political machine. As my favorite MEP Daniel Hannan put so well in his blog this week, European politicians seem incapable of understanding that markets are not like the electorate: they do not do as politicians tell them to do.

Even more laughable is the politicians’ assumption that they will — and frustration when they don’t. Quoting what the European President Herman Van Rompuy wrote in the Guardian, “Astonishingly, since our summit the cost of borrowing has increased again for a number of euro area countries. How amazing! What, you mean bond traders didn’t take your word for having solved the debt crisis in Europe?

The European Financial Stability Facility (EFSF) is, at 440 billion euros ($625 billion), laughably inadequate to manage the growing contagion of Italian and Spanish debt why politicians think the markets will accept such a figure when independent assessments suggest some 2.5 trillion euros would be required is unclear. The yield on Spanish debt has increased to 6.45 percent while Italy’s has reached a 14-year high at 6.21 percent as this graph from the Telegraph shows. 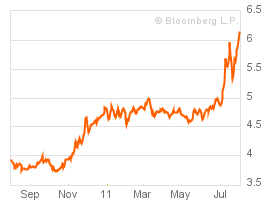 In fact, Italy is more of a problem in the short term than Spain, even though Spain has an appalling housing crisis and higher unemployment. Italy has debts of 119 percent of GDP and JP Morgan in a NY Times article suggests the country will run out of cash by September. Except for German bonds, Italian debt is more widely held by European banks than any other government obligation, the article says, and a default there could devastate Europe’s financial system. Europe’s 90 largest banks collectively hold Italian debt with a face value of 326 billion euros ($562 billion), according to data collected by the European Banking Authority. That sum overshadows the 90 billion euros in Greek debt held by the largest banks. It is also much larger than European banks’ holdings of Spanish or United States debt, which in both cases is about 287 billion euros.

Willem Buiter, chief economist at Citigroup and a former member of the Bank of England’s monetary policy committee, states in a Financial Times article that the most likely outcome is Europe will move to a system over the coming months in which creditors share in the pain. Buiter estimates creditors of Greek debt to suffer between 65 and 80 percent losses of net present value. Portugal and Ireland are likely to go the same way. He assumes in his analysis that the EFSF will be expanded to 2,500 billion euro, but that could sound the death knell for Angela Merkel’s tenure as German chancellor, if not leader of her party (CDU). Bailouts of the periphery are, understandably, deeply unpopular in Germany and the approval of such a figure is by no means certain.

Time Is (Not) On My Side

The biggest challenge is time. It’s holiday season in Europe and even completion of the final text around the 440 billion-euro EFSF will take weeks to complete; ratification by all 17 governments could take months. Meanwhile the markets work in hours and they are shunning Italian and Spanish debt unless the rates are worth the perceived risk. The premiums Madrid and Rome pay to borrow over Germany reached euro-era highs of 404 and 384 basis points. Both the yields and premiums are close to levels that pushed Greece, Ireland and Portugal into bailouts. Interestingly, the premium France pays to borrow over Germany also hit a euro-era high of 75 basis points while British treasuries (Britain retains its pound and is not on the euro) took on almost safe-haven status as yields on 10-year debt dropped to lows not seen since 1946.

Europe’s debt worries are bad enough on their own, but coming on top of slowing growth in China and North America, poor PMI numbers from all major trading blocks and still-high energy costs, the possibility of a double dip is again being voiced in some quarters. For the first time in the last two years the possibility looks like more than an outside chance.