Late last week we wrote about the reliability (actually lack thereof) of US GDP data coming from the BEA. The fact that markets have tanked further since that last writing should come as no surprise as the economic data appears quite negative.

Well, we’re here to point out the obvious the economy never really “recovered in the traditional sense; but, despite all of the bad news, not all of the signals appear as negative as the mainstream press would have us believe. In fact, the forward-looking Consumer Metrics Institute has painted a slightly different picture. In the words of founder Rick Davis (in conversation with MetalMiner) he described the economy as having “moved out of its vegetative state and into [merely] a comatose state. The Consumer Metrics Institute publishes a number of charts and analyses that serve as leading economic indicators. And while the media had touted economic growth, the Consumer Metrics Institute remained quite pessimistic. Readers can find our write-ups on their analyses here, here and here.

Are Things Slightly Better Than They Currently Appear?

Because the Consumer Metrics Institute believes its data precedes BEA data by at least 160-180 days, by looking at the current snapshot, one can gain a better sense of where at least the consumer portion of the economy may go (emphasis on the word “may”): 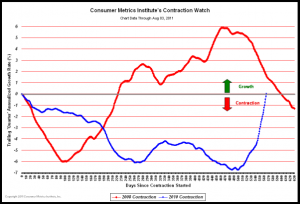 Folks, this chart has looked moribund for 566 days according to the Consumer Metrics Institute. On Aug. 3, consumer data hit the zero-yard line. This nugget of data represents the most positive consumer trend we have seen in, well, 566 days. We do, of course, remain cautious if not leery. So what has suddenly occurred that may have stopped the contraction?

Davis provided us with plenty of insight, specifically that “something happened and it started to happen in early July. He believes “either people stopped feeling sorry for themselves or people realized things won’t get better anytime soon so they decided to go out and take advantage of this. By take advantage, Davis refers to low interest rates for mortgages. “Perhaps people see substantial bargains, and for people that have put off starting families for a couple of years they may realize that they can no longer do that anymore, hence some of the recent buying activity, possibly also assisted by the debt ceiling crisis and belief that without a solution, interest rates might rise.

In terms of GDP, consumer demand equates to approximately 70 percent of the equation. To get a better sense of the story we refer to, two charts, also from the Consumer Metrics Institute, approximate the “absolute” values of on-line consumer demand, where a value of 100 represents the year-long average consumer demand for the baseline year of 2005. From a short-term perspective, the data examining absolute demand appears quite positive: 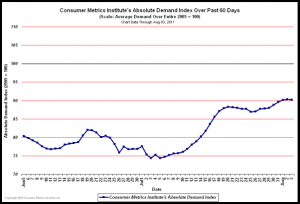 Though July data generated enough of a blip to push the overall contraction chart into positive territory, the longer-term absolute demand trend remains tepid at best: 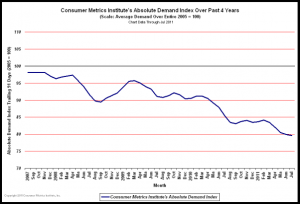 Whereas the Consumer Metrics Institute believed the 2010 recovery comprised more vapor than substance, they believe the economy appears to have bottomed. And if you follow the BEA’s lag time in reporting actual GDP, Davis believes we’ll see one more bad quarter of GDP data followed by a better report in Q1 2012. Unfortunately, markets (and sentiment) have reacted to the lousy, antiquated, ever-changing BEA GDP data.

In one final post concluding this series, we’ll examine business sentiment and what the numbers within individual sectors tell us.