With stock markets the world over plummeting last week (the Dow lost more than 500 points, the biggest single-day drop since December 2008), there may seem to be nothing but dark days ahead. If manufacturing numbers (PMI, etc.) are any indication, growth is elusive.

By this token, the U.S. and global auto production and sales numbers may tell us a lot about where steel, aluminum and lead may be headed in H2. Although sales and profits at certain auto companies in the US have been reported higher than expected, the global outlook may not look so good.

However, the prospect of US economic recovery is looking dim these days, if you listen to the talking heads of these companies. “Chrysler’s U.S. sales chief, Reid Bigland, called the market “tougher than a cheap steak,” while his equivalent at General Motors Co, Don Johnson, said “consumer confidence is pretty fragile right now because of everything that’s happened in the past few months,” as quoted in a Reuters article.

And that’s why incentive spending by these carmakers in the US and Japan may be taking more of a front seat, according to Reuters. Based on information from Edmunds, the car research firm, domestic auto manufacturers may look to increase incentive spending to match that of Japanese brands. Toyota and Honda’s spending is much higher, since the tsunami set back their production this past spring, and

“Japanese brands increased incentive spending about 25 percent to $1,990 per vehicle from June to July, compared with a 4.5 percent rise to $2,919 per vehicle by the U.S. automakers, according to Edmunds.

However, these deals surely cut into profits, and GM, for one, proved that it didn’t have to rely on them in July. According to an AP report, GM was able to pull back its rebates in the wake of the Japanese disaster, since Toyota and Honda’s inventories were down. The report cites that GM’s incentive spending per vehicle fell 20 percent to $3,022 in June, according to TrueCar.com. That led to GM doubling its profit to $2.5 billion in Q2.

But many are saying that won’t last. Mainly, raw materials prices continue to trend higher, and that cost allowed GM to raise its prices. However, that may not be sustainable. On the flip side, if steel prices soften in H2 this year, profits may decrease again, coupled with the still-stagnant consumer demand likely to continue.

Globally, car sales are either mediocre or falling in China and India, the two largest auto markets in Asia. The Chinese Association of Auto Manufacturers (CAAM) reported only a 0.65 percent increase in production and 1.4 percent increase in sales in June, according to their website. (This is crucial for GM, whose China sales are key to their health.) Increases in both production and sales seem to have leveled off to match corresponding months in 2010, continuing the softening growth trend in China: 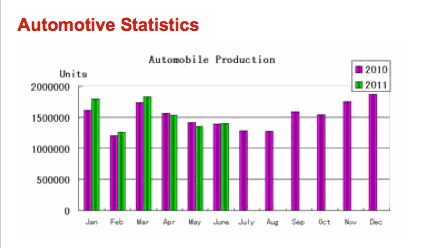 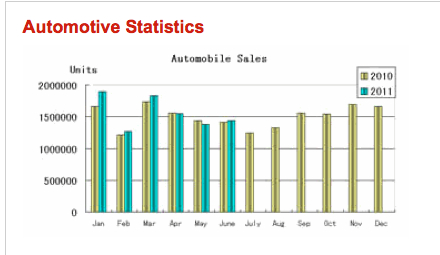 And in India, car prices are getting much higher due to interest rate increasing, prompting their national auto association to drastically downgrade sales and production — MetalMiner’s TC Malhotra detailed this scenario in a recent post.

All of this points to perhaps much lower auto demand in the second half of this year. We’ll wait to see what effect Japanese restocking will have in the fall, as well as how the rolled steel and aluminum prices are trending. On the consumer side, if the unemployment rate drops significantly in H2 and brings spenders back into the auto market, then we could have a different outcome.