Home | Commodities | Shale Oil Could Be US Answer To Reliance On The Middle East
Commentary, Market Analysis

A series of articles by Reuters columnists and Chesapeake Energy’s August 2011 Investor Presentation (once the “Ra-Ra” is filtered out) serve to underline the rapid and largely unseen revolution that is going on in the domestic US oil & gas industry. And I don’t mean in shale gas — well, close — this is shale oil. From almost nothing just two years ago, production is ramping up faster than just about every projection expected. Chesapeake alone is expecting some 41 percent of its production to come from oil by 2012, up from just 12 percent in 2009, as this graph shows. 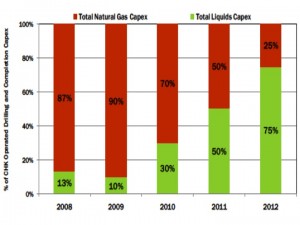 Where Chesapeake leads others follow, or more accurately, race them neck and neck. Drilling for liquids has taken off with a shift towards shale oil rather than pure shale gas plays. Rig demand is outstripping supply as explorers look to capitalize on high oil prices in preference to subdued natural gas prices. 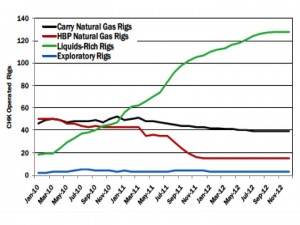 But between June and July, the U.S. Energy Information Administration boosted its own forecast for 2012 liquids production by a startling 170,000 barrels per day. Further revisions will no doubt follow. The consultancy Bentek said last week that output at Eagle Ford Shale in Texas had more than doubled in the last two months to 160,000 barrels per day and was on track to grow fivefold by 2015. Likewise, Chesapeake’s Utica Shale — stretching over large areas of Ohio, into Pennsylvania and north into Canada — has been valued by the firm at $20 billion. To put that in perspective, the FT advises that is roughly equivalent to Chesapeake’s current market capitalization.

Not everyone is convinced however, although the often-close occurrence of shale gas and shale oil is proving a boon for explorers as they seek to share cost savings across both resources. Many say shale oil resources suffer from the same challenge as shale gas. That is, initial well fracturing releases significant volumes, but well productivity drops off quickly, requiring operators to keep up the pace of drilling.

To counter this firms are investing significantly in new technology and drilling processes. US firms’ leadership in this area is underlined by the massive inflows of foreign investment in the sector as oil and commodity firms around the world look to both secure a chunk of what they see as a valuable asset and also the technology. Unlike natural gas, for which the US is still largely a closed market with very limited LNG export capability, oil from shale is priced at world oil prices, not domestic US gas prices, which are below world markets. LNG prices abroad are twice the level they are at home, driving a coal-to-gas switch for electricity generation; levels doubled this summer from last.

A sharp correction in oil prices may slow drill rates, but even pessimistic predictions of a fall to $80/barrel should not significantly dent the rate of reserve increases seen so far. If shale oil proves as bountiful as shale gas, it may not be long before the US import bill for Middle Eastern crude begins to fall as a result of greater domestic production.

PREVIOUS POST:
Rosy Q2 Glow For US Automakers May Not Last
NEXT POST:
India's Future in Coal