BMW has revealed details of just one of the projects they have been spending all those millions of euros of profit on recently. Building on test-bed trials they ran with electric Minis over the last couple years, BMW has released details of two concept cars which they hope will be sufficiently different from all the other EV and hybrid offerings out there to generate volume sales. Although the two vehicles fall under the same, Apple-like i-project designation, they are substantially different in many ways. 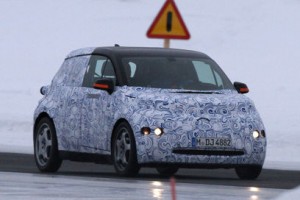 The compact four-seat i3 is an all-electric, largely urban vehicle which looks crushingly awful in the above photo of a test car courtesy of autoexpress.co.uk, but somewhat more attractive in the artist design image alongside its stablemate, the i8 below, from BMW themselves.

Both vehicles, while platforming many new ideas that have been gestating at BMW, have some notable design similarities. In particular, BMW states that the weight-saving by building the cars from carbon fiber on top of an aluminum chassis allows them to use significantly smaller and lighter (and therefore cheaper) lithium ion battery packs. We have to take them at face value here; it doesn’t sound intuitively obvious that the saving on a lighter battery pack is greater than the cost of carbon fiber + aluminum (minus what the body would have been using steel).

In addition, in the life cycle of the car, carbon fiber is a very expensive material, both to produce and to repair in the event of an accident, but maybe that is part of the issue — car producers don’t pay for repairs, but they do pay for the battery supplied with the car. Is it preferable to keep battery costs down at the expense of long-term repair costs? A US automotive blog site called autoblog advises the not-so-sexy i3 is powered by a 150-horsepower electric motor and a lithium-ion battery pack that reportedly provides up to 100 miles of range. The battery can be 80 percent recharged in one hour on a rapid charger or fully recharged in 6-8 hours on a 220v mains outlet. All that weight-saving is evident in the specs though; the i3 will weigh only 1270kg (2800lbs), a useful 250kg less than the Nissan Leaf, and is scheduled to come to market in 2013.

The more sexy i8 is a different concept, a two door 2+2 seat hybrid sports car with electric motors running the front wheels and a 1.5-liter turbo-charged three-cylinder petrol engine driving the 1480 kgs (3263lbs) car from 0-62 mph in just 4.6 seconds 0.3 seconds faster than the M3 Coupe and to a governed top speed of 155 mph via the rear wheels. Fuel consumption is said to be in the region of 90 miles per imperial gallon and deposits now will not see a delivered car before 2014.

Full details on both cars can be found on the BMW press site here. In addition, BMW in the UK has a clever graphic display showing how the carbon fiber body fits around motors and internal components connected to the aluminum chassis. As one would expect with a concept car, specifications are still limited.

BMW is, to its credit, taking the evolution of the car in a more holistic fashion than their peers. They are said to be pouring $100 million into research and development around the i-series inter-connectivity with the outside world. For example, the sat nav takes you to the closest parking spot to your destination and then seamlessly connects with an app on your mobile phone to navigate you through pedestrianized areas this is a European car, remember to your final destination. No doubt such innovations will be rolled out through all of BMW’s range, some even before the i-cars come to market. The question is, will BMW’s use of carbon fiber and aluminum eventually take over from their use of steel and aluminum as the primary method of automobile construction? That will be an interesting trend to follow over coming years as an aluminum man, I am just pleased to see my metal playing a role in both design approaches.