China RMB Appreciating Fast: What It Means For Future Trade

China has adamantly resisted calls over recent years to allow its currency to free float, maintaining it will only do it when in China’s interest and at a time that is of its own choosing.

That time may be getting a little closer.

You may reasonably ask, why would China change a subsidy system it has been running for years and has allowed it to run up the largest reserves and balance of trade in history? Well, the evidence is not overwhelming, but there are two developments that are causing the Chinese problems and both relate to its currency manipulation.

Diversifying the Road Ahead

The first is, what the hell do they do with all the foreign currency they are accruing? China’s comments about US indebtedness underline the frustration Beijing has over the prospect of the dollar falling even further, wiping more millions off the value of China’s US investments and opening the prospect of US inflation causing yet more damage down the road.

China is keen to diversify out of dollars, but they have few options. The euro, which is the second largest global currency, is hardly an attractive investment at the moment yet Chinese purchases have been supporting the single currency for months. 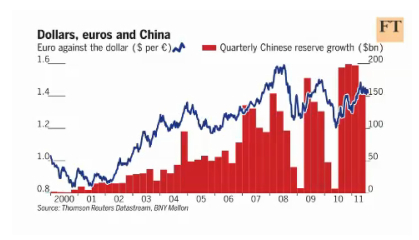 A chart on the Financial Times’ Short View, shown above, shows a plot of the euro and dollar against China’s reserve growth. The two most recent periods of euro weakness have corresponded exactly with a dropoff in reserve accumulation, underlining the impact that China buying has had in supporting the euro.

The yen and Swiss franc are so strong, possibly as a partial result of Chinese buying, but certainly driven by their safe-haven status, that their central banks are taking action to drive them down. China can hardly buy against that trend without serious political consequences. So where else do they park tens of billions every month? China’s trade surplus shot up to $31.5 billion in July, up from $22.3 billion in June, according to a separate article; that is a lot of money for which to find a home.

Maybe more seriously, inflation is still strong. Although this week’s IP and Retail Sales figures are fairly solid, both CPI and PPI remain stubbornly high, coming in at 6.5 percent and 7.5 percent, respectively. Such a robust set of figures leaves little room for maneuver in terms of China letting up on its war against inflation anytime soon, but a stronger currency would make rapid inroads into supply side input costs, contributing significantly to lower inflation numbers. Not surprisingly, RMB appreciation has begun to accelerate of late. The RMB this month has been allowed to rise against the dollar at an annualized rate of about 11 percent, compared with an average 4 percent for this year so far.

For the metal markets, the appreciating RMB has improved US-denominated imports against Shanghai Futures RMB-denominated stocks and domestic production, supporting imports. Indeed, copper imports in particular would probably be higher if it weren’t for the falling LME price encouraging buyers to stay on the sidelines for lower prices. Demand in China is still strong, with any hesitation in primary metal imports being made up with scrap. Growth is not as fast as last year month-on-month, but with millions of affordable houses being built, copper, iron ore and aluminum demand looks likely to remain steady in China even if it weakens elsewhere in the world.

An early float of the RMB is highly unlikely, but a continuation of the controlled appreciation has a lot to commend it from Beijing’s point of view.