A glaring example related to how the United States has abandoned adoption of a sound domestic manufacturing policy comes in the form of US infrastructure maintenance, building and spending. Reuters reports that the US is dropping significantly in the rankings of quality of and investment in its infrastructure, including roads, bridges, rail lines and seaports.

According to a recent assessment, the World Economic Forum will downgrade the US’ national infrastructure systems ranking in its 2011-2012 report, which is due out in September. The US will rank No. 16 in the world, falling from No. 6 in 2007-2008. South Korea overtook the US last year, and Hong Kong is at the top of the list, as the graph below shows. According to Reuters, “the quality of American roads is on par with those of Malaysia. 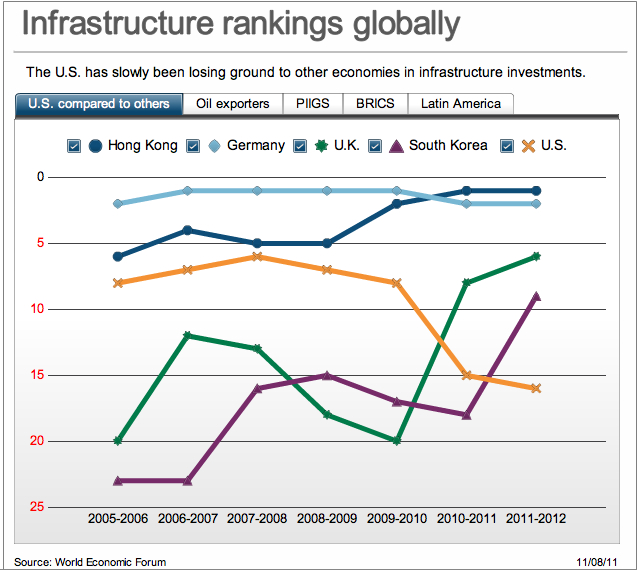 As seen above, German infrastructure investment had eased slightly from 2009-10 into 2010-2011, and even though German growth slowed considerably in the second quarter this year (only growing by 0.1 percent) due mainly to rising interest rates, certain investments actually increased, according to the Wall Street Journal.

In the US, bridges such as the Brent Spence over the Ohio River, connecting Cincinnati, Ohio, with Covington, Ky., are being choked up as never before, creaking under the old steel, rivets and trusses that were put into place likely during the last infrastructure boom in the 1960s.

The main problem is that the sheer volume of traffic these days overburdens these systems, while there is no money being invested in improving or rebuilding. Workers have a project going to replace the existing Brent Spence bridge span, but the funding for it has dried up. The US government reported last year that it now spends about 2 percent of its GDP on infrastructure per year; that figure represents half of what it used to spend 50 years ago. By comparison, Europe spends 5 percent of its GDP and China spends 9 percent.

However, so many European countries have undertaken austerity measures that those percentages may change, but evidence suggests that the Eurozone places a much greater emphasis on this type of investment. China, too, continues to grow, and a good portion of their infrastructure investment is for new structures, as opposed to fixing or replacing existing ones.

As for the metal markets, US seaports are at a critical juncture. Jonathan Turnbull, a managing director of the infrastructure group at Lazard, an investment bank in New York, was quoted as saying that American miners pay upwards of four times what the Australians do to get coal to port and loaded on a ship. This obviously counts as a hit against the efficiency/profitability of US exports as compared to China’s.

Ultimately, our lacking infrastructure and future policies harm our ability to compete. The question remains, how do we get more money funneled to these projects and to the steel producers and metal suppliers that could depend on them for increased orders, hence increased production without bloating the US debt? With all the deadlock around government spending cuts and the debt ceiling, key investments (of which infrastructure would seem to be an obvious choice) are in limbo and may get left by the wayside.

If the government is trying to avoid a double-dip, increase jobs and grow the economy, yet makes it harder for manufacturers to help bolster these fronts by avoiding a clear policy, where does that leave us as a country?