Taking our recent coverage on China into account, we decided that one of MetalMiner’s best-read posts of the summer was quite apt:

10 Reasons To Short China: Part One

I’m reminded of Thomas Friedman’s famous quote from his book, “The Lexus and the Olive Tree “Buy Taiwan, Hold Italy, Sell France. Never one to accept conventional wisdom, I try to look in some less-than-obvious places for information that makes me challenge my own assumptions. And like some of you, I change my mind from time to time (becoming less “pro-free trade as they say because of the obvious skewing of how trade rules apply to various goods produced by various countries) and so have titled this post accordingly. And being a person more interested in the social sciences vs. the hard sciences, I like to look beyond the numbers and speak to the proverbial man on the street to augment and/or challenge some of those assumptions.

One assumption I have begun to challenge (reminiscent of Mark Twain’s quote, “The reports of my death have been greatly exaggerated”) suggests to me that the notion of China taking the lead over the US in terms of (fill in the blank) power appear premature.

In short, I have begun to rethink my position on China vis-a-vis one assumption that all commodity markets, nearly all media and just about every economic pundit have made. The assumption that the Chinese middle class is growing and will continue to grow has given me pause to rethink that view. Because we don’t have the space or the time to properly define the middle class, we refer to this chart published in February, 2009, defining China’s middle class: 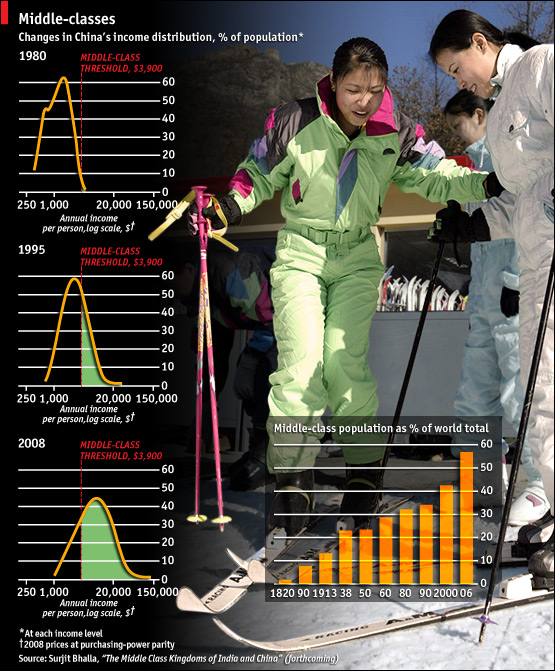 Further still, we borrow this definition of the middle class, also from the Economist: “The new middle consists of people with about a third of their income left for discretionary spending after providing basic food and shelter. The article discusses China’s middle class and suggested back in 2009 that economic conditions can turn both ways. “Those at the bottom of the ladder do not have far to fall. But what happens if you have clambered up a few rungs, joined the new middle class and now face the prospect of slipping back into poverty?

The anecdotal evidence we have gathered suggests it is possible that this may now be happening.

Here are 10 Reasons Why We Doubt China’s Ascendancy:

PREVIOUS POST:
Chennai Seaport in Lockdown While Shippers Despair
NEXT POST:
Swedish Scientist Splits the Atom…In His Own Kitchen