Hot on the heels of our articles (here and here) a couple of weeks ago about China’s C919 sub-200-seat, single-aisle contender with Airbus’ A320 and Boeing 737, comes Russian Sukhoi’s single-aisle 100-seat SuperJet in competition with Bombardier of Canada and Embraer of Brazil. 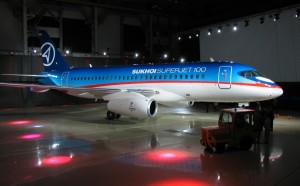 Not that serious aviation experts are really ranking the SuperJet on par with the established players just yet (certainly not more than they would place the C919 on par with the A320 or 737), but the rise of emerging market plane makers is an interesting trend which will have subtle yet far-reaching effects on the aerospace metals supply market in the decade ahead.

Show Me the Sukhoi

Arguably Russia’s Sukhoi has a better pedigree than China’s COMAC. Although seasoned travelers all have a scary domestic Russian flight story aboard an aging Tupulev to tell at dinner parties, the reality is Sukhoi did build some impressive military jets even if their commercial offerings left a lot (and I mean a lot) to be desired!

The firm claims it has orders for 176 of the new SuperJets on its books, including 15 for Mexico’s second-largest airline InterJet. The firm hopes to sell 800 and has sold 25 percent of the firm plus given marketing rights to Italian engineering firm Finmeccanica’s Alenia Aeronautica. Sales are being run out of Venice for non-former Soviet markets and application has been made for European certification.

Certification will be one thing; widespread acceptance of Russian aircraft may be another. While passengers in emerging markets and discount airlines may be willing to compromise their trust in the plane maker for a lower fare, major western airlines may take longer to be persuaded. An article in the NY Times explains the firm has already had talks with Delta and SkyWest about possible sales, but buyers will be only too well aware that memories run deep of multiple plane crashes in the former Soviet block and those are the ones that hit the headlines. Although the new plane is said to look and feel like a modern airliner, with pleasant furnishings, bright lights and quiet, high bypass engines, it’s the accident record travelers will likely focus on.

Still, Sukhoi is something of a national champion and will receive considerable support. It is probable the plane will be produced in significant numbers and a slow acceptance may be engendered overseas. The return of volume aircraft manufacturing will encourage Russian aluminum and titanium producers to focus on domestic supply at the expense of exports. Europe has become reliant on Russian aluminum and titanium supply for a significant portion of their commercial market needs.

As Russian mills divert material not just to aerospace but to a robustly growing domestic economy, less material will be available for export, putting upward pressure on prices. Sukhoi’s regional SuperJet does not need to make major inroads into the US or even Europe to have an impact on both established players or the supply chain. Significant sales to cost-conscious new entrants in places like India or Indonesia could still amount to substantial sales, impact established plane builders’ prospects and affect the metal supply chain.