What To Expect in Manufacturing Production for Q3 2011

by Taras Berezowsky on September 6, 2011

Manufacturing growth has been expanding for just over two years straight now according to the Institute of Supply Management (ISM), but that doesn’t tell the whole story. The steadiness of the growth doesn’t mean that it’s not sluggish and it also doesn’t mean that metals companies aren’t feeling the pain from uncertainty.

Released late last week, the PMI stands at 50.6 percent, and over 50 means there’s overall expansion however, the PMI decreased 0.3 percent from July to August. Customers are less confident and therefore less willing to place orders due to the “concern and caution over the domestic and international economic environment, said Bradley Holcomb, chair of the Institute for Supply Management Manufacturing Business Survey Committee. 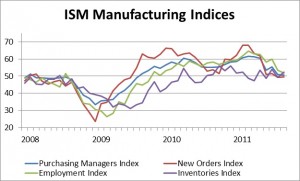 Fabricated products and machinery industries reported expansion in August, while primary metals reported contraction. Prices increased for aluminum, silver and stainless; prices both increased and decreased for copper and steel (cold-rolled steel prices decreased) while titanium dioxide used in pigments and as a photocatalyst in the technology sectors was reported in short supply. Both production and employment are down in August from July (technically speaking, growing less robustly), and exports dropped 3.5 percent as imports rose 2 percent.

These findings, especially on employment and exports, dovetail with MFG.com’s recent MFGWatch Manufacturing Supply Survey of North American buyers and suppliers, conducted quarterly. While MFGWatch seemed to see heartening results from job shops and contract manufacturers in terms of hiring in the last quarter, the majority of both buy-side and sell-side companies surveyed indicated they were expecting not to hire or invest in the second half of the year:

In terms of exports, a sizable majority of suppliers 84 percent are not planning to increase exports in the second half of the year; they’re either staying put at current export levels or not considering exporting at all. (Although, with Chinese renminbi having still not appreciated to satisfactory levels against the dollar, who’s to blame these firms? Why would you decide to get into the export market with such short-to-medium-term uncertainty in the first place?) 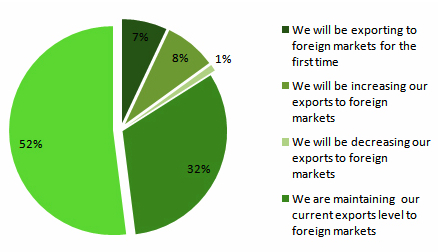 Other notable points from the MFG survey:

In his commentary on the Shopfloor blog, Chad Moutray, the chief economist for the National Association for Manufacturers (NAM), considered the “weakness in new orders the biggest concern as we begin Q4. This is, according to Moutray, a red flag for future production. We would agree, especially as we’re seeing higher inventories. Without orders, it’s that much tougher to create new jobs.

So how can we tell what second-half manufacturing trends look like for the US? We know that sentiment seems to outweigh the fundamentals, as producers and suppliers’ pessimism for H2 overrides the marginal growth that certain industries are experiencing. As my colleague Stuart will write in an upcoming post, it all depends on what happens in the East over the next few months — with China in particular. As long as they continue to import metal for their infrastructure and auto needs, provided those sectors remain robust, we shouldn’t despair too badly.

PREVIOUS POST:
Best Of MetalMiner – To Those Who Work In Manufacturing: Happy Labor Day!
NEXT POST:
Growth Slowing, and We Are Talking Ourselves into a Recession