China’s exports have recovered fast following the downturn of 2009.

For the last ten years, China has gradually increased its share of world trade and in particular manufactured exports, such that by 2010 they reached 13.7 percent up from 12.1 percent in 2009. As labor costs have increased, low-cost products like textiles, footwear, and toys have come under pressure. So far, Chinese firms have coped by moving production inland to lower cost regions, but this trend is not sustainable in the long term as gradually labor costs equalize across the country.

Beijing has seen this coming and has been active for years in developing the critical mass in production of higher-technology, more capital-intensive products. Government incentives have been the carrot and pressure on state-owned firms has been the stick to encourage consolidation, acquisition of foreign technology and capital investment. The primary intent of Beijing’s efforts is not world domination, but was initially to reduce dependence on foreign firms and create the know-how to service the home market. The home market, however, is always a proving ground for eventual global sales, just as it was for Japan, South Korea and the other Asian tigers as it was indeed for the US a hundred years or more before.

The EIU report carries a fascinating analysis of those industries most at risk form Chinese competition — not in the future, but right now. 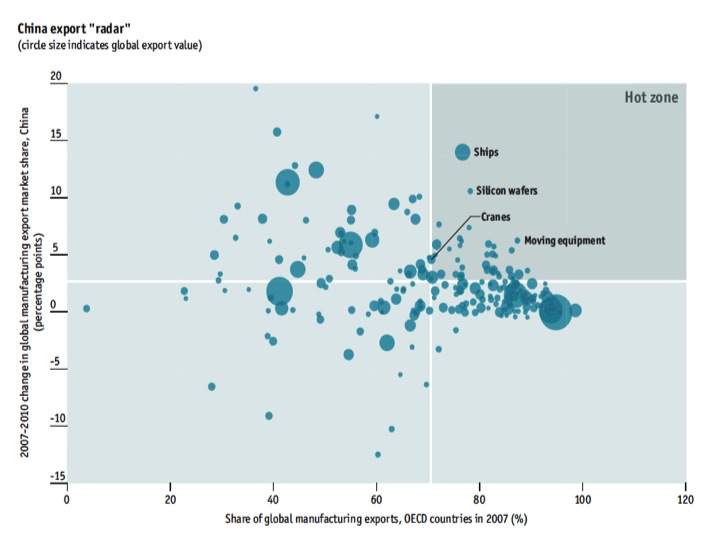 A total of 217 commodity export markets with a global export value of at least $10 billion each in 2010 are plotted in terms of OECD countries’ share of global exports on the horizontal axis, together with the three-year change in market share experienced by China on the vertical axis. The EIU has then segmented the graph into four quadrants, based on the average market share increase experienced by China, and the average market share held by OECD countries. This reveals in the top-right quadrant what they term the “hot zone, showing those sectors in which OECD economies held a dominant market share, and in which Chinese exporters have made significant inroads over the past three years.

This post will continue in Part Two next week where we examine the position of some specific industries in the hot zone.