Do a Google Images search for “apple aluminum and you’ll see how metal is an important part of Apple’s productsâ€mostly in its laptops like its MacBook Air, whose first generation arrived in 2010: 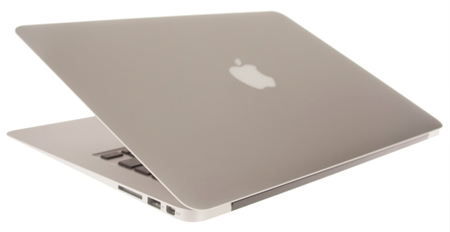 Other products composed of metal include the Wireless Keyboard and Magic Mouse:

This is a distant departure from Apple’s plastic past, which was a part of the company’s “snow white appearance created and advanced in the eighties. At that time, Hartmut Esslinger, who founded Frog Design, was the director of Apple’s Industrial Design Group.

Under the direction of Jonathan Ive, who assumed direction of Apple’s Industrial Design Group in 1997, the company’s design language advanced metal into a leading role. In 2008, the MacBook Pro line introduced a more streamlined case, rendered from a single block of aluminum. In 2010, the iPhone 4 was launched with a stainless steel frame.

Among its physical qualities, metal is opaque, hard and brilliantâ€the same qualities describe Apple. Metal is also known for high electrical conductivity, which applies to the atmosphere surrounding Apple’s unveilings of new products. Apple Co-Founder and Chairman Steve Jobs described Apple as the “greatest sandbox in the world where “great ideas rule, not hierarchy. Like metal, the hearts and minds of Apple’s employees and customers are charged. Who knows if metal will continue to be functional and visible in Apple’s products? What persists is the metallic bond that binds the energy of Apple’s design language, inside and out.