That China has suffered severe and widespread pollution from the mining and refining of rare earth elements (REE) is not in doubt — the issue is: are China’s restrictions on the export of such materials justified under WTO rules?

According to a Reuters article, demand for rare earth metals, a group of 17 elements used in a wide variety of technology applications, is expected to double in the next five years. China produces some 97 percent of the world’s supply, but has been cutting back on exports and raising tariffs for the last two to three years, choking off world supply to the point where the EU and North America are making representations to the World Trade Organization.

Firstly, the case for: the New York Times reported this week that China had largely shut down its rare earth industry for three months to address pollution problems. Officials confirm evidence visible by satellite that large tracks around both legal and illegal mine sites have become wastelands. 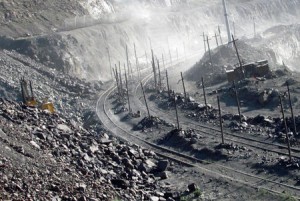 Quoting the Xinhua news agency, online journal WatchChinaTimes (WCT) describes one case involving a massive hole the size of a basketball court on a mountain ridge in Dayang, Guangdong province.

Residents said illegal miners used the opening to clean rare earth materials before shipment. Local authorities did not take swift or forceful action to shut down the operation despite complaints and appeals from a number of communities. Although the illicit operation was finally closed down, pollution nightmares continue to haunt residents as toxic water from waste heaps and the makeshift mine finds its way into creeks and ultimately to the drinking water supply system. Nor is drinking water the only medium affected; REE are found in association with thorium, making waste from the refining process radioactive. Illegal mining operations simply dump waste from their operations and allow both poisonous and radioactive contaminants to pollute the soil, ground water and the air.

The answer should be stronger environmental controls — rigorously applied — but as WCT reports, local authorities are as much part of the problem as they are the solution. Local politicians and bureaucrats, if not the authorities themselves, often have some ownership in both legal and illegal mines. Not surprising then that local residents find it hard to get anyone to take any action — the authorities are incentivized to allow those operations free reign. Beijing’s response is to force the closure of smaller legal and illegal operations, consolidating those mines that are sufficiently large under the control of state-run mining and refining operations.

The NY Times reported this week that Beijing is creating a single government-controlled monopoly, Bao Gang Rare Earth, to mine and process ore in northern China, the region that accounts for two-thirds of China’s output. The government is ordering 31 mostly private rare-earth processing companies to close this year in that region and is forcing four other companies into mergers with Bao Gang, according to Li Zhong, the vice general manager of Bao Gang Rare Earth. Apparently the government also plans to consolidate 80 percent of the production from southern China — which produces the rest of China’s rare earths — into three companies within the next year or two. All three of these companies are former ministries of the Chinese government that were spun out as corporations, and the central government still owns most of the shares. These actions will at least ensure Beijing achieves control of mining and refining; if pollution remains a problem, they only have themselves to blame.

The flip side — what about prices? Continued in Part Two first thing tomorrow…

And to read more on Asian state-owned enterprise competition with US industry, click here and here.