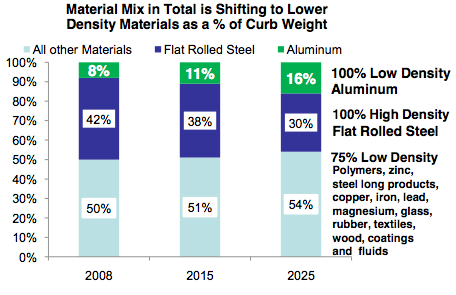 Many statistics and reports show that aluminum use in vehicles is set to continue its upward trend in the decades to come (at the expense of steel), as fuel efficiency standards continue to play a huge role in government policy and subsequent industry compliance. This of course is good news for rolled producers such as Alcoa and Novelis.

What does this mean for aluminum prices? The secondary aluminum market, for one, should be relatively robust. At Harbor Aluminum’s June conference, Harbor’s Senior Aluminum Analyst Jesus Villegas mentioned that aluminum scrap prices should be seeing a sustained rise, given the health of the auto sector and Chinese demand. As far as rolled products and contracts go, if the demand is there, one would be hard-pressed to project plummeting prices. If sales go south, production pullbacks or excess inventory may change the outlook.

But we do need to keep a bigger picture in mind. Indeed, Ducker Worldwide, the survey group that reported the growing trends of aluminum-per-vehicle, presupposes several “basic assumptions in carrying out their study, including an average of at least 2.5 percent US GDP growth over the next ten years, at least 75 million North American vehicles produced between 2012-2016, high and ever-increasing fuel standards, suppliers’ timely provision of aluminum parts to OEMs, and virtually no increase in oil price or volatility trends for the next five years. Realistically, some of these control variables may be difficult to achieve. (Not to mention that the report was essentially drawn up with Aluminum Association-provided data; Ducker does the same for AISI on HSLA (high-strength, low-alloy) and Advanced High-Strength Steel use the amount of the latter per vehicle, according to the graph above, has actually grown each year since 2008 and is expected to continue growing through 2025.)

And while aluminum used in cars has risen 138 percent in the past two-and-a-half decades, “only 100 kilograms of China’s passenger cars contain aluminum, which is equivalent to the level seen in North America in 1996, said Xiong Hui, senior analyst for Beijing-based information service Antaike, at June’s Harbor conference. Although Beijing has been putting forth stricter environmental standards for vehicles on an MPG basis than the US, it is not an apples-to-apples comparison. Besides, the total amounts of metal in Chinese cars and engines do not stack up to US models.

Following the argument through, aluminum (scrap and primary production of which is at a premium in China) and its use in cars may not be proportionally as rapid as in the US and EU. That in turn would mean car markets other than China’s would have to step up to the plate by showing more than their fair share of robust sales; with the domestic US economy as it has been, betting on a growing auto sector in either the developed or developing world — may be a much tougher sell than companies like Alcoa think.