Has Gold Finally Hit Its Peak?

Gold slipped below $1,800 per ounce last week as equities rallied in a burst of risk on investor enthusiasm. Does this spell the end of the bull run? The gold price has seen a lot of volatility of late and questions are being asked — not least by those holding long positions — as to what the future for gold prices holds in store.

GFMS, the precious metals consultancy, is understandably still bullish. In their recent quarterly Gold Survey, they are quoted by the Telegraph as saying, “Given strong demand for bullion from the public and private sectors Â¦ the relatively constrained increase in scrap supply and the ‘stickiness’ of jewellery demand in the fact of higher gold prices, we can easily envisage gold breaking through the $2,000 market before year-end.” Pointing to strong purchasing by central banks in the first half of this year, GFMS predicts full-year bank demand could reach 336 metric tons, the highest level since the collapse of Bretton Woods 40 years ago. The firm is not alone; even normally conservative HSBC raised its 2012 average price to $2,015 from $1,625, with analyst James Steel citing “the euro-zone debt crisis, currency wars, and deep uncertainty among investors” among factors driving higher prices.

Which Way? Make Up Your Minds

Nick Moore of RBS makes the point that gold is in a fundamental supply surplus and its rise is therefore a reflection of investor demand rather than physical supply and demand factors. High prices alone bring on an element of physical demand destruction — total global investment in gold dropped 24 percent in volume terms to 624 metric tons in the first half of this year. Clearly, net speculative length in gold has been falling, as the graph below shows: 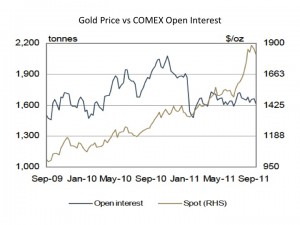 Speculative longs — those holding gold in the expectation of a rise — have been falling, as speculative shorts have now risen above last year’s average of 90.7 tons.

Silver and palladium have been in the news of late, more because of their performance relative to gold than because of major fundamental changes in their respective markets. Although ETF buying for silver remains strong, some are questioning how much further it can go. It has risen 885 percent over the last decade against gold’s 569 percent, and yet industrial demand could be shaky in the short term as recessionary fears spread beyond the euro-zone to slowing Asian and North American markets.

Platinum, on the other hand, is looking cheap relative to gold, having fallen to a discount. Nick Moore said that over the last ten years, platinum has averaged $420 per ounce higher than gold. According to Johnson Matthey’s Platinum 2011 published earlier this year, the market fundamentals for platinum are tight. The market showed a very small surplus of 20,000 ounces in 2010 as global supplies rose 35,000 ounces to 6.06 million ounces while gross demand in auto catalysts rose by 43 percent to 3.13 million ounces and industrial demand increased 48 percent to 1.69 million ounces. Slowing Chinese growth in automotive construction is probably the cause for the recent falls, but industrial use has remained robust. Platinum’s position seems more solid than Palladium’s which is increasingly looking bearish with short positions mounting suggesting prices will be lower in the fourth quarter.

Support for gold looks largely reliant on euro-zone debt worries. Recent positive sound bites on possible solutions to those worries have caused the price to pull back; an exit for Greece or downgrade of a major state’s credit rating will see it pick up again. Gold at over $2,000 is assuming some form of breakup to the euro-zone (probably Greece’s exit). That’s not looking likely in the short term, but with European politicians more focused on their domestic political fortunes, continued dithering — and hence risk of ultimate failure and support for gold — remains a strong possibility.