How much notice do you take of electrical pylons when enjoying the vista of open countryside? We’re so used to seeing the 150-foot-high towers stretching across our countryside that barely a second thought is given to whether they could be designed differently.

In the UK the design has remained largely unchanged since 1927, when Sir Reginald Blomfield’s design was first erected by (moment of pride here) US engineers the Milliken Brothers. Now the UK has some 88,000 of these ghastly structures blighting our landscape and although few have been built in recent years, a major new expansion is going to be required this decade according to Chris Huhne, the governments energy minister.

In a Telegraph article Huhne is quoted as saying Â¨”Britain will see the equivalent of 20 new power stations constructed by 2020, and we need to use electricity pylons to get this new, low-carbon energy to your televisions and toasters, dishwashers and DVD players.” What was the circumstance that prompted him to make such a depressing statement, you may ask? Well, more than the normal ministerial comment fortunately, Huhne was speaking at the London Design Festival this week at which the six shortlisted finalists from 250 applications were released. The design challenge is to replace dear old Sir Regie’s 75-year-old design with something a little more graceful, maybe even aesthetically pleasing, if that is possible for such a mundane structure. Of course the competition organizers, the British National Grid, do not promise to adopt the new design, but full marks to them for commissioning it and prompting a debate.

It is difficult to find details of the amount of structural steel used in a typical 400,000-volt power line tower, but at around 150 feet high it must be substantial. Some of these new designs call for tubular structures, some for lattice works made from formed angles or flats, others would have to be formed for rolled and welded sheet so if the winner is adopted for widespread use, both in new structures and replacing aging lower voltage towers, the impact on the domestic steel demand could be significant within that product category. The designs differ markedly and some hold out the possibility they would not need to be so high, reducing their visual impact against the skyline.

The designs can be seen at this website, run by the National Grid, to showcase the competition. Readers have to get past the hyperbolic design descriptions made by the designers — you really wonder if these guys are frustrated poets in the wrong trade — but the ingenuity of their designs can’t be faulted. 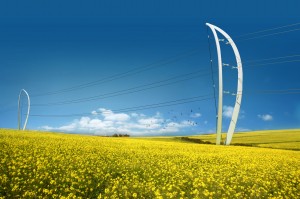 Our favorite is probably Plexus by AL_A Pylon, and although we don’t hold with the “Plexus creates a poetic dialogue between structure and landscape, it’s certainly more attractive than the current Eiffel Tower-type structure.

For more designs and our take on what this means for the steel industry, check back in for Part Two.