Military Robots Spur Use of Light Metals and Composite Combinations

It would seem the march of the robots is relentlessly turning science fiction into reality. Last year we wrote a piece on robotic developments for the battle field and yet even in a few short months, more products have come out of research centers in the US and UK that make a revisit of the subject worthwhile at least for those boys among us interested in such things! 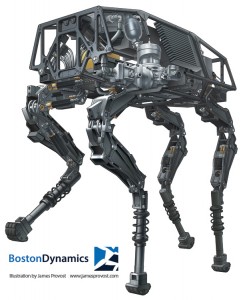 The weirdest has to be Boston Dynamics’ BigDog, the size of a small pony and made from advanced metals and composites. The latest version of the four-legged robot can travel across 13 miles of rough terrain while carrying up to 340 pounds of equipment, relieving the growing burden soldiers have to bear when operating far from base or in areas where wheeled transport is impractical. Boston Dynamics has a team of 90 people from all kinds of disciplines, including advanced robotics, computer programming, mechanical design and electronics working on the project. 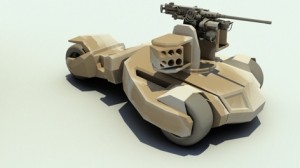 On the other side of the pond, British defense group BAE systems have more than 100 people involved in developing land, air and sea robots. One of their current projects, The Raider, is about the size of a small car and draws its design inspiration from Batman’s Batmobile in The Dark Knight. Made from a mixture of Kevlar, plastics and aluminum, Raider is light and strong. Designed to travel fast across rough ground without being seen, even the antennae are built into the body to give it a low signature.

One firm spun out of the British government called QinetiQ has research running on both sides of the pond. A current project is aimed at miniaturizing an already successful product, Dragon Runner 20, being used in Afghanistan in the hundreds mostly for roadside bomb disposal and reconnaissance. The new version Dragon Runner 10 (let’s hope their research is more imaginative than their names) weighs just 10 pounds, is easily carried in a backpack, and is capable of being fitted with an array of sensors and attachments depending on its role. Lives will undoubtedly be saved by sending such devices into potentially hostile areas ahead of the troops to feed back enemy positions or, just as important, those of civilians.

The design criteria for all these devices have certain common demands. Light weight for transport and low power consumption run counter to the need for armor at least sufficient to meet minimum survivability levels. Dragon Runner, for example, can be dropped from multi-story buildings and still operates successfully. Strong light metal alloys such as titanium and aluminum are therefore required in partnership with composites such as Kevlar for protection.

PREVIOUS POST:
More than Shale Gas Technology Making its Way to Europe
NEXT POST:
Why Export Taxes, Quotas, Other Restrictions Must Go