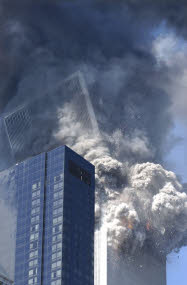 For those of you conspiracy theorists out there that don’t buy the fact that the World Trade Center’s Twin Towers collapsed due to overheated structural steel beams here’s an interesting new theory to ponder on a Friday.

Now, I must admit: while I haven’t completely given over to the conspiracy theorists’ dark side, I have been skeptical of a lot of “facts surrounding the 9/11 attacks, and even indulged in reading and watching so-called “documentaries trying to debunk the official government line on the circumstances surrounding that day. All that said, some of the conspiracy crazies have even more nutso thoughts than what we know to be the truth. But even this new theory sounds a bitÂ¦out there.

Christian Simensen of SINTEF Materials and Chemistry recently presented his theory at a San Diego technology conference that the buildings collapsed due to explosions caused by the chemical and physical reactions that the planes’ aluminum hulls had with water from the buildings’ sprinkler systems.

This is how he explains it:

“All the floors in the Twin Towers were equipped with sprinkler systems. All the water above the hot aircraft bodies must have turned to steam. If my theory is correct, tonnes of aluminium ran down through the towers, where the smelt came into contact with a few hundred litres of water. From other disasters and experiments carried out by the aluminium industry, we know that reactions of this sort lead to violent explosions.

“The aluminium would immediately react with the water, with the result of a local rise on temperature of several hundred degrees, in addition to the explosions that were due to the fact that these reactions release hydrogen. Such reactions are particularly powerful when rust or other catalysts are present, which can raise the temperature to more than 1500 Ã‹Å¡C.”

“The aluminium industry has reported more than 250 aluminium water explosions since 1980. Alcoa Aluminium carried out an experiment under controlled conditions, in which 20 kilos of aluminium smelt were allowed to react with 20 kilos of water, to which some rust was added. The explosion destroyed the entire laboratory and left a crater 30 metres in diameter.”

Previous conspiracy theories about the collapse have been debunked by Popular Mechanics and others, who maintain the “fact that weakened steel beams were the culprit. Although the burning jet fuel was not hot enough to melt steel, it reportedly did the necessary damage: “Steel loses about 50 percent of its strength at 1100 °F,” senior engineer Farid Alfawak-hiri of the American Institute of Steel Construction told Popular Mechanics. “And at 1800 ° it is probably at less than 10 percent.”

Some commenters, however, prefer to remain wary of Simensen’s conclusions. One in particular noted that combining iron oxide (rust) with molten aluminum (Fe3O2 + Al = 2Fe + Al2O3) yields a compound called thermite, which is the same substance other theorists have “suspected to have been used in the controlled demolition of the towers.

Whether this new theory puts anything to rest is up for debate. What’s certain is that not having closure on the exact cause of the explosions 10 years after 9/11 just like not having a completed memorial museum or Freedom Tower borders on unacceptable.

PREVIOUS POST:
Why Export Taxes, Quotas, Other Restrictions Must Go
NEXT POST:
Appetite For Steel Brakes to a Halt…For One Man