Steel producers are fighting back with higher strength steels that can be used in thinner (and hence lower weight) gauges, but the expectation is aluminum usage in car bodies will double in this decade, which will add an additional 12 million tons of annual aluminum consumption, an increase of more than 25 percent. Steel production compared to aluminum and copper of course is a factor of ten higher, as the graph below shows, so a major gain for aluminum will barely register on steel consumption globally yet may have a more significant impact for producers specializing in, say, automotive flat-rolled material. 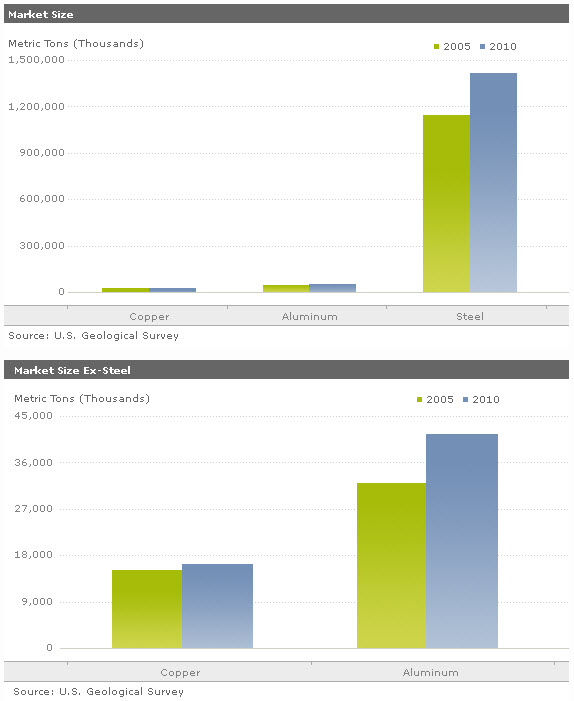 Another battle is between copper and aluminum in electrical applications. On a per-pound basis, aluminum is actually more conductive than copper because weighs one-third less. The problem is the diameter of the aluminum conductor needs to be greater because aluminum is a poorer conductor. It is also more of a challenge to create secure connections as aluminum “gives under tension.

Getting back to the automotive topic for a moment, automakers have already found many aluminum-for-copper substitution opportunities on cheaper models. The average vehicle in the US or Europe uses 20-25 pounds of copper, but the models sent by the same manufacturer to developing economies have only a quarter as much. If copper prices continue to rise at a faster rate than aluminum, it is likely that as much as 40 percent of copper used in cars could be replaced by aluminum in the next few years, the Morningstar article reports. In totality, Alcoa believes aluminum has the potential to replace 20 percent of the copper used annually, which would constitute more than 3 million tons per year.

In electric and hybrid vehicles, two to three times more copper is used than in conventional cars, often in applications in which aluminum is not as suitable a conductor, but volumes remain minuscule so far and are likely to remain so until EV and hybrids take another step in technology to create real consumer interest. Copper’s superior conductivity makes it the only choice for applications where size is critical, such as many electronic applications. The conclusion is up to 10 percent of copper use could still be switched to aluminum and the driver is copper prices as the decision is almost entirely cost-based.

The article quotes Alcoa as saying they expect the aluminum market to double to more than 80 million tons by 2020, and although they don’t specifically say so, substitution will be a part of that gain. While the opportunity varies by application, aluminum is the clear winner in the substitution game, with copper, and to a much lesser extent steel, likely to bear the largest brunt of aluminum’s gain. While the market opportunity for aluminum as a replacement for steel is much larger than as a substitute for copper, the steel sector dwarfs the base metals in size (as shown in the charts above) and thus the hit will not be so obvious. A loss of 12 million tons of steel globally is marginal, but 1-2 million tons of copper replaced is 10 percent of the entire market.