Earlier this week we wrote about the greater volatility and higher prevailing prices of copper compared to steel and aluminum, expanding on an article by Morningstar. Today we want to draw on some analysis the same article made regarding the impact substitution of one metal for another will have on demand in the years ahead. A graph we used previously bears repetition here, because it illustrates better than words the greater volatility of copper prices over the other two bulk metals consumed in industry steel and aluminum. 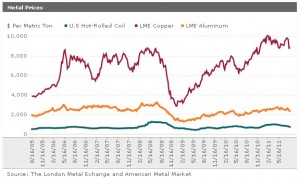 Due to a number of factors — most significantly Chinese demand overlaying a relatively tight supply market — copper has moved from a long-term ratio of approximately twice the price of aluminum to an average of nearly four times the price since the middle of the last decade. In addition, as the Morningstar graph shows, copper has been much more volatile, both in percentage and in absolute dollar terms than either steel or aluminum. For some applications metal price is not the main driver of change, but in others, absolute metal price as a percentage of COGS and metal price volatility are both major drivers of substitution. The main thrust of the article, though, is not a direct comparison between copper and the other two volume metals but among all three, as the greater volatility in prices we have been experiencing for the last 8-9 years has driven and will continue to drive the search of substitutes above and beyond legal, environmental and product development pressures.

It’s widely accepted that aluminum has little to fear from steel when considering substitution in the aerospace industry. Aluminum’s lighter weight far outweighs its higher cost; the greater threat comes from composites and titanium, not steel. But in other areas of transportation, particularly automotive design and rail carriages, there is a fierce battle going on between aluminum and steel, driven by the search to reduce weight and hence improve fuel efficiencies (as my colleague Taras wrote about recently).

The article explains that in a typical passenger car, about 25 percent of the car’s weight is made of the body skeleton, another 25 percent is the engine and transmission, and 20 percent is the chassis and suspension. All of these components are primarily made from steel, although aluminum is making steady inroads in all three. That is roughly 55-60 percent of total car weight coming from the cheaper metal, with aluminum making up only about 8 percent.

The body skeleton is where aluminum makers have set their principal sights. Current estimates indicate that doing nothing other than switching from a steel car body to one made of mostly aluminum can shave 10-15 percent off the weight of a car, which would create about a 10-percent gain in fuel efficiency while maintaining safety standards at current levels. The trend to aluminum use is understandably led from the high-end automakers where the increased cost is most readily passed on and the fuel savings most dramatic.

PREVIOUS POST:
Is Shale Gas Production the Cure for US Manufacturing Economy?
NEXT POST:
Aluminum To Gain Upper Hand on Copper and Steel – Part Two