A Financial Times article this week suggested that recent strength in the Baltic Dry Index, a measure of charter rates for bulk carriers, could suggest that fears of an Asian slowdown are overdone. The BDI has risen 52 percent over the last month or two, according to the FT, as China has continued to suck in unprecedented quantities of iron ore and coking coal. A recent Reuters article provides a useful graphic of how demand has continued to rise:

The FT explains the index is skewed towards the biggest Capesize ships, able to carry 175,000 tons or more at a time. The rise of the past two months has been almost entirely due to Capesize vessels. In part that is due to the recovery in Australian iron ore exports after the January floods damaged the country’s port infrastructure, but the other side of the coin is that the percentage rise is misleading.

After the 2008/9 crash, the market was awash with bulk carriers as new vessels continued to come on stream while existing vessels were laid up. So rates have dropped dramatically and are now rising from a low base, making percentage increases appear more dramatic than they really are.

Our own analysis of steel prices in China, most importantly measured in local RMB, do not tell such a compelling story. 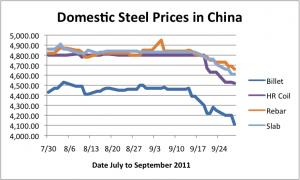 Prices have been on a slide since the summer, most notably in recent weeks, in spite of continued high iron ore and other raw material costs maintaining pressure on steel makers’ margins. The slide in prices seems highest among basic materials like billet and less pronounced in products like CR coil and sheet sold more on contract and less on the spot market.

Nevertheless, falling steel prices in conjunction with reports of slowing growth rather counter the suggestions of the Baltic Dry Index that growth is still robust at least in terms of recent years definition of robust. Track the MetalMiner Indx for local market prices in China if you have an interest in monitoring this deteriorating price scenario.

PREVIOUS POST:
LME Week: Amidst Copper Drop and Commodities Selloff, What to Expect in London
NEXT POST:
New Tantalum Supply Sources to Ease Some of the Shortages