Last week we speculated as to whether the conflict minerals legislation within the Frank-Dodd financial reform bill would impact the supply market for tantalum. Certainly supply shortages ensued following the financial crisis in 2008 when three of nine tantalum producers shuttered production. So how can one describe the global tantalum supply market? As a 6 to 7 million-pound market, thirty percent of supply has historically come from the Democratic Republic of Congo (DRC). That supply base no longer serves the global market. Our back-of-the-napkin calculations suggest that 1.8 2.1 million tons of capacity have come off the table, so to speak. The tantalum supply market historically appears as follows: 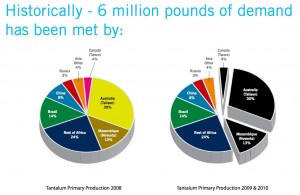 New sources of supply will take some time to catch up with demand. We understand the following tantalum projects have or will come on stream as follows:

If we tally up annual production for these nine new projects and use 500,000 pounds per year for Critical Elements Corporation’s annual production numbers, we come to approximately 3.87 million pounds of new supply plus current supply sources (remember industry leader Talison, now Global Advanced Metals, used to supply 29 percent of the market or 1.68 million pounds, but today supplies 8 percent or 480,000 pounds) to fill the 6-7 million-pound demand scenario.

With the Global Advanced Metals production declines, combined with tonnage that had come from other parts of Africa (estimated at 30 percent or another 1.8 million pounds) even with all the above-referenced projects coming on-stream (highly unlikely), we could still see a supply shortage despite Global Advanced Metals’ ability to conceivably increase production. Unless we see some dramatic substitution effects (always possible), tantalum prices will likely remain well supported while supply remains constrained.

In the meantime, if your firm buys tin, tungsten, tantalum or gold, you may wish to attend our first Conflict Minerals webinar led by Lawrence Heim of The Elm Consulting Group.

Register for the webinar here!

Even if you can’t attend the webinar, sign up for it to automatically receive a link to the replay.