It turns out aluminum and manganese are at the core of the new Nobel Prize offering in chemistry.

Just when we all thought that crystals were synonymous with perfect order, and that nature herself worked in predictably repeating patterns, Dr. Daniel Shechtman of Technion – Israel Institute of Technology in Haifa had the guts to say, “Hey, wait a minute I think I’m on to something new here.

In fact, according to a BBC article, Shechtman is reported to have said “Eyn chaya kazo, Hebrew for “There can be no such creature, when he peered into his microscope back in April 1982 and discovered what are called “quasicrystals. 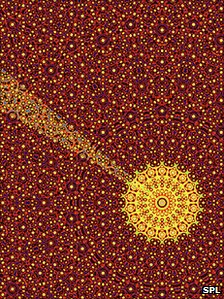 Shechtman took certain metals, including aluminum and manganese, melted them down, and “squirted them onto a cool surface. Then, he passed an electron wave through the molten metal grate, and he saw how the aluminum and manganese atoms diffracted the wave, creating a new crystal pattern that was ordered, but never repeated itself five-fold rotational symmetry, as he explains in the American Technion Society video below:

This was unlike any crystal pattern previously known.

The scientific community ostracized him for reporting what most considered impossible, but Shechtman’s discovery ended up in much of what consumers face today. Quasicrystals are used in durable steels, frying pan coatings, electrical wire insulators, razor blades and ultrafine needles used in eye surgeries, among other things.

Potentially, quasicrystals will be used in “applications that range from light-emitting diodes to improved diesel engines,” said Nancy Jackson, the president of the American Chemical Society, to the BBC.

Congrats to Dr. Shechtman, who now has gloating rights in the chemistry world for a cool, metal-related discovery and a 10 million-Swedish-krona prize (nearly $1.5 million) all to himself.