One of the things I love about this job — if job it can be called — is the variety of information you come across. A fascinating piece by Rachel Cooper in the Telegraph newspaper caught my eye the other day and prompted me to contact the manufacturers. The article detailed the development of a highly sophisticated prosthetic called bebionic, made and developed in the UK by a near-century-old prosthetic manufacturer called RSLSteeper. But don’t be fooled by the history; the product is cutting-edge in terms of articulation, speed and sophistication in use.

Illustrating how art and science so often overlap, engineer Mark Hunter developed the original design while working at Jim Henson’s Creature Shop media special effects company in London, and he took the idea to RSLSteeper in 2008 because of the firm’s reputation for innovation. The UK Technology Board and the firm’s private equity investors helped raise some $3 million for development, culminating in the bebionic hand last year. 350 units of the first model were sold before an improved version, bebionic v2, was released this year. The firm is looking to sell between 750 and 1,000 next year, predominantly in the US. 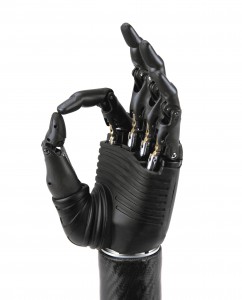 Unlike comparable prosthetics, the bebionic has a motor to drive each digit, allowing up to 14 grip patterns — some of which can be personalized for the individual user with the software provided. The above image shows how the joints are very similar to a biological hand, but the final product is covered by a “glove that looks just like human skin, complete with nails, pigmentation to match the rest of the body and even veins beneath the surface.

Such Stuff As Dreams Are Made On (Well, Almost)

Being metals geeks, we were more intrigued as to what goes into the construction of these high-tech prosthetics and managed to catch up with Ted Varley, the firm’s product development manager. As the bebionic weighs only about one pound, we expected its construction to be largely of plastics. In fact, the designers made extensive use of MB1 Silicon Brass for high-strength components such as the thumb wishbone and finger fuse links, whereas for lighter-weight components, aluminum casting alloy LM25 is used.

For both alloys, part shaping is achieved by investment casting, but using plaster rather than ceramic molds to achieve parts with extremely high definition. For machined components requiring high strength, Ted turned to aerospace alloy 2014 in the T6 condition for strength, light weight and machinability, but used 416 stainless steel for all the finger pins and fixings to counter corrosion resistance while maintaining strength. Even where plastic parts have been used, some have benefited from an aluminum skin to enable parts to withstand impact loads.

The result is a such a sophisticated prosthetic hand that Dave Sullivan, a colleague of Mark Hunter’s and formerly a guitar bass player prior to losing his left hand, has returned to playing the guitar and using a keyboard, both computer and piano. For Sullivan, as for others unfortunate enough to suffer such appalling injuries, the bebionic hand offers the prospect of near-full functionality again.

PREVIOUS POST:
US Shale Gas Production All the Rage, But Will It Save US Manufacturing?
NEXT POST:
Do Free Trade Success and Manufacturing Education Go Hand in Hand?