As a follow-up to a previous post, let’s take a look at the year lead has had. One may have expected demand disruption in China, the world’s largest lead market, to have hit prices badly this year, but as this graph from the LME shows, prices have pretty much followed the base metals trend of rising in the spring, followed by the big selloff; a recovery in the summer, and then the ensuing base metals and equity market-wide slump since. 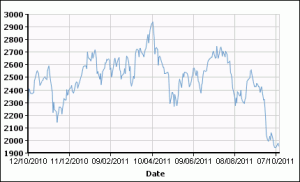 In a Reuters article, Johnson Controls, the world’s largest manufacturer of car batteries at 120 million units last year, is confidently forging ahead with new recycling plants in the US and Mexico and a major expansion at their German facility, saying the development of larger batteries to support stop-start technology in Europe was spreading to North America and generating growth, even as the rest of the economy appeared lackluster.

Meanwhile, environmental problems in China led to the widespread closure of battery makers this year, according to a Standard Chartered report to investors. Beijing issued shutdown orders to 1,598 out of 1,930 battery plants between March and August this year following widespread reports of poisoning. 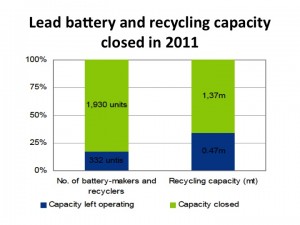 In fact, battery makers have responded, rapidly upgrading equipment and controls to pass clearance for re-starts. Lead demand in China has remained remarkably resilient in the face of such disruption while at the same time, the shake-up has facilitated the rationalization and modernization of what has been a fragmented and chaotic industry. The battery industry emerging from the closures is expecting another double-digit year of growth and is better positioned to grow further in 2012.

Lead has often been referred to as the “recession-resistant base metal and the bank’s report notes that demand has remained decent in spite of a slowdown in other sectors. If sales to OEMs for new vehicles slow, sales of replacement batteries pick up to support the extended life of the used car market. 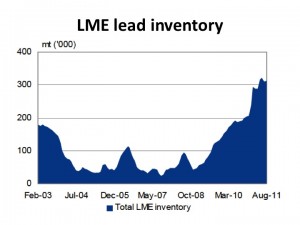 Rising stocks have been voiced as a cause for concern in some quarters, particularly following September’s large influx when LME stocks reached nearly 375,000 tons, the highest level on record. 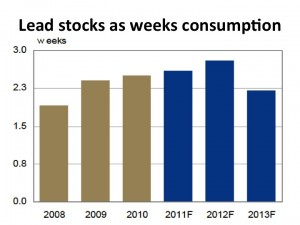 But as the bank points out, at the time of the previous peak in October 1994, global demand was half what it is today, so in terms of weeks of consumption, stocks are around 1.6 weeks now compared to 3.5 in 1994. Even adding in SHFE inventory, which didn’t exist in 1994, we still only have 2.3 weeks of inventory on hand, making it second only to copper in terms of an exchange stocks-to-consumption ratio.

While a strong Chinese market and a steady Western market for lead will not alone be enough to encourage prices to rise, it would make the metal more resilient to further falls than the wider base metals complex, in which there are metals in considerable oversupply.

PREVIOUS POST:
Aluminum Canifesto: The Marriage of Metal and Craft Beer
NEXT POST:
Copper Price Forecast: Could the Next Move Be Down?