China, as the world’s largest steel producer, is the world’s largest consumer of molybdenum. China is also the world’s largest moly-producing country (although North America is the largest producing region). According to the International Molybdenum Association, use of molybdenum in transportation, power generation, building and construction will likely increase by 6 percent each year through 2019. This view was shared by Roskill last year, who saw under-investment in molybdenum projects in 2009 and 2010 having consequences for supply as far ahead as 2015. So if demand is strong and supply is constrained, why have prices fallen this year, and could the predicted long-term price/demand trend be at risk? 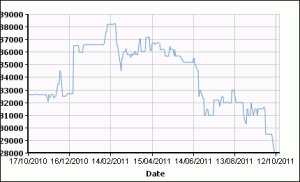 Iron ore demand and steel production in the world’s largest steel market, China, have remained strong this year, yet molybdenum imports have not kept pace. As an article in the Tex Report states, the Chinese Iron and Steel Association (CISA) released data showing that steel production in September was up 3.1 percent from August.

The total annualized run rate of production is over 700 million tons, compared year-over-year with 2010, when China produced just over 550 million tons. The global steel production growth rate stands at 9.8 percent, although recent numbers suggest a distinct softening everywhere except Asia. China, however, has been pushing 13.8 percent this year. The continued strength of steel production in China would suggest that molybdenum, an essential in high-strength steel production, would also be equally well supported, but as the table below shows, China has swung to becoming a net exporter of moly oxide.

Although June and July saw imports exceed exports as domestic mines in China are brought on-stream, it is expected China will increasingly seek to rely on domestic molybdenum concentrate supply rather than imports, resulting in ongoing pressure on prices. Molybdenum has fallen to below $14/lb, and unless Chinese merchants decide to step back into the market to opportunistically import, global demand is likely to remain bereft of Chinese buying.

While domestic prices have followed the global trend in broad terms, this graph of ferro-moly prices in China taken from the MetalMiner IndX shows they have not been as volatile: 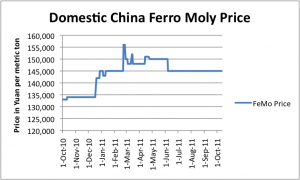 With slowing demand in China inevitably feeding through into slowing steel growth, the chances of China resuming imports on a consistent basis looks unlikely. Good news for moly consumers in the West, who were harboring concerns earlier that supply constraints would prompt a return to higher prices next year.