Home | Ferrous Metals | Nature vs. Steel Industry, Or: What Spiderman Knew That We Didn't
Metal Appreciation

Nature vs. Steel Industry, Or: What Spiderman Knew That We Didn't 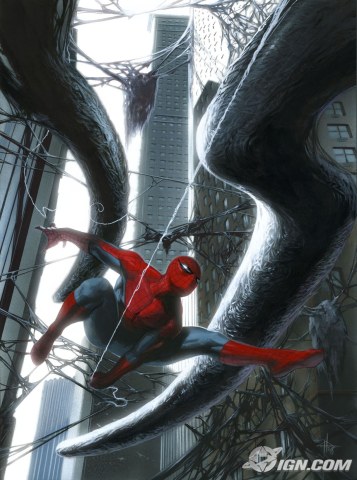 Scientific discoveries these days are proceeding at a rate of knots, focusing a lot on how to do things more efficiently or with less pollution. Now it appears science will overtake even the metal industry.

Well, possibly not all of it, but at least one niche: the science of biology is providing a challenge to conventional metals.

We talk of the market for protein-based polymers with better specifications than their metallic counterparts. Scientists have always seen spider silk as a substance with potential. Peasants in Eastern Europe used to cut up webs made by the spider genus Atypus for medicinal uses. They would take the inner tubes of the spider’s cocoon and lay it over wounds to promote healing. Being rich in vitamin K, the web would have promoted blood clotting and prevention of infection.

Fast forward to the present-day. Recent scientific research has quantified just what the mechanical properties of some of the different spider silks are. Weight for weight, silk is stronger than steel — although not Kevlar — and it is tougher than both. This leads to some interesting potential uses.

Since researchers successfully implanted the gene that produces the protein in E. coli, the silk can be made relatively cheaply in the laboratory, and formed there in the factory. The challenge comes in the actual weaving of the silk, because in nature they are produced between 2.4 and 3 micrometers in diameter.

Nevertheless, its use in bulletproof vests is being explored. Apart from being significantly lighter than Kevlar, its greater toughness would mean one could be hit twice in the same spot and where the Kevlar would give in, the silk wouldn’t. It is also more flexible than a Kevlar plate.

The species Darwin’s Bark spider produces the strongest known spider silk, according to this research paper: “The toughness of forcibly silked fibers averages 350 MJ/m3, with some samples reaching 520 MJ/m3. Thus, Darwin’s Bark silk is more than twice as tough as any previously described silk, and over 10 times tougher than Kevlar.”

Silk from the spider species Nephila clavipes has been used in mammalian neurone regeneration due to another interesting property of silk: it is not recognized as invasive by the human immune system. In vitro experiments showed that a single thread stretched between a neurone and the point it was severed from will allow the neurone to grow along the thread and rejoin with its other half. The silk of the golden orb spider used in this experiment has a tensile strength six times that of high-density steel.

Nexia Biotechnologies has a substance known as Biosteel, which is made from the same proteins extracted from transgenic goats’ milk that have been given the spider protein gene.

“The medical need for super-strong, flexible and biodegradable materials is large,” said Costas Karatzas, Nexia’s vice president of research and development. Not only will Biosteel have applications in medicine such as synthetic tendons or ultra-thin biodegradable sutures for eye surgery, but they are also teaming up with the US military to look at producing dragline silk for aircraft carriers. The silk would be thinner and lighter than the current steel cable used.

The main thrust of Nexia’s breakthrough is the ability to produce fibers on an unprecedented scale while maintaining an eco-friendly production line.

PREVIOUS POST:
Molybdenum Prices On Their Way Down and Out?
NEXT POST:
SEC Moves Conflict Minerals Requirements Forward, While Critical Minerals Amendment In Limbo