It isn’t often that one can compare a political issue around boilers (of all things) to the billionaire businessman Mortimer Zuckerman’s frustration with the Obama administration. (Zuckerman voted for and supported Obama until a couple of policies caused him to have some regrets about his choice).

Specifically, Zuckerman had supported the notion of stimulus spending, but became frustrated when “roughly half of it went to state and local municipalities, which is in effect to the municipal unions which are at the core of the Democratic Party.” In the same article, he also expressed dismay at the tradeoff surrounding health-care reform the trade-off between cost control and coverage (Zuckerman in favor of the former; the Obama Administration favored the latter).

What Do Boilers and Mortimer Zuckerman Have in Common?

Perhaps not much, save for one point well-intentioned public policy often has ugly, unintended consequences.

The steel industry finds itself frustrated with a rather massive unintended consequence to an environmental regulation as promulgated by the EPA. And here’s the irony the environmental groups that have pushed the EPA to adopt strict Boiler MACT rules (which would limit the emission of several pollutants, specifically mercury, lead, cadmium, nitrogen dioxide and particle pollution by requiring any institution that uses a boiler with “a large source of air toxics emissions to upgrade their systems) could unravel one of the steel industry’s most novel energy-efficiency innovations in recent years.

US Steel Industry Would Lose a Competitive Advantage

As proof that the US steel industry operates at a global competitive advantage when it comes to energy usage in steel production, we refer to a study sponsored by the DOE examining nine major steel producing nations: 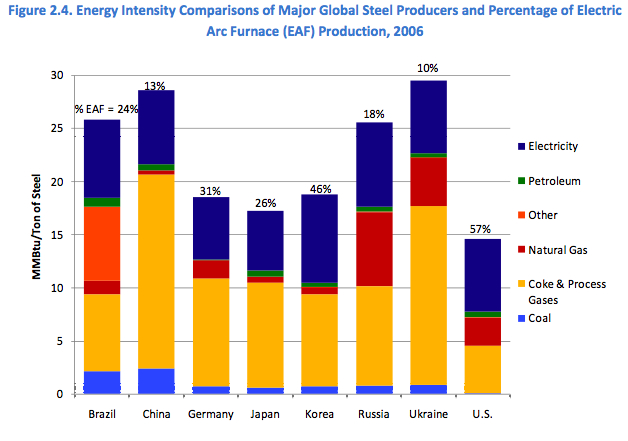 Source: US Department of Energy

The US consumes the least amount of energy of all nine nations. Any erosion of energy efficiency will of course raise the cost structure of the US integrated producers. And we all know what happens when cost structures rise.

But the new Boiler MACT rules (the final rules have yet to be issued) could dismantle a steel industry standard practice of recycling process gases. This process only involves the integrated mills that recycle gases on site from coke ovens and blast furnaces. According to Brett Smith, senior director of government relations for AISI: “From our standpoint, the original proposal from EPA back in February 2010 was problematic in how it dealt with process gases. In an interview with MetalMiner, he went on to say, “In the past two decades, the steel industry has made a 30-percent improvement with regard to energy efficiency. In March of this year, the EPA finalized and published the rule. According to Pete Pagano, VP of Environment for AISI, “the EPA did make some positive modifications, but not all address the coke oven issues.

The Boiler MACT rules would require a range of industries (and companies) to replace existing boilers with new ones that release fewer pollutants. To comply with the rule, the steel industry would spend approximately $600 million for equipment. The alternative approach would require steel mills to flare off the gas, not buy the equipment, but pay an additional $300 million for natural gas (vs. using the recycled process gas).

Meanwhile, the entire “Boiler MACT issue has heated up (pun intended). Late last week, the US House of Representatives passed a bill that would give the EPA additional time to review and propose revised regulations as well as extend the timeframe for compliance. Of course, the regulations have had their time in court, too. The Sierra Club sued and won a suit forcing the EPA to publish the regulations in a more expedient manner. According to the AISI, those rules will come out later this month and become finalized next spring.