We compared the relative positions of Alcoa and Rio Alcan in an earlier post, along with their respective readings of the future. Where Alcoa saw opportunities, Rio Alcan clearly saw if not problems, then at least lackluster growth.

Much will depend, of course, on global aluminum production and price levels. Growth forecasts are bullish, particularly in China, but also elsewhere. Alcoa’s own predictions are for aluminum demand growth even in mature economies at well above GDP over the medium term. 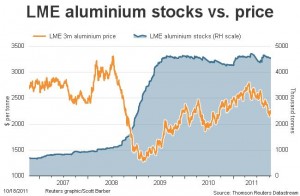 As the above graph shows, exchange stocks have been falling recently; at the end of September, some 4.564 million tons were held in LME-registered warehouses, down from 4.633 million a month earlier, suggesting Alcoa’s growth forecasts are indeed sopping up rising production.

According to a Reuters article, total visible stocks of aluminum, including the latest International Aluminium Institute (IAI) stocks, were estimated in September to be around 6.13 million tons, down from 6.32 million a month earlier, while aluminum stocks at the Japanese ports of Yokohama, Nagoya and Osaka at the end of September fell 4.1 percent from a month earlier to 231,400 tons.

Exchange inventory falls support the case put forward by some analysts that the market is in structural deficit, but a recent report by Reuters suggests there is more to the story than what is happening on the LME. The same article carries another post advising stocks of aluminum have almost doubled at the port of Rotterdam in the last three to six months.

Jouke Schaap, director of break-bulk at the port, is quoted as saying this week: “We have got 2.0-2.5 million tons of stocks of aluminum lying around the port right now, and that’s never a good sign,” adding that this compares with levels of around 1 million to 1.5 million tons usually. The flows have gathered pace in the last three months, suggesting up to a million tons of aluminum are being produced in excess of global demand, but are disappearing from the figures into long-term financing deals, held not on the LME but in private stores.

The worry is not that this metal will suddenly flow back into the market, but more that it shows the market is in significant oversupply, much more than official figures are suggesting. If the forward curve flattens and new financing deals become less attractive, this supply of surplus metal will wreak havoc on prices.