Perhaps the US scrap markets won’t need to listen to all this blustery talk about heading into another recession. After all, with the recent AISI report that US raw steel production rose 14.3 percent year-on-year last week, up to 1.86 million tons, and capacity utilization also up to 75.1%, things might be looking good for the US industry. 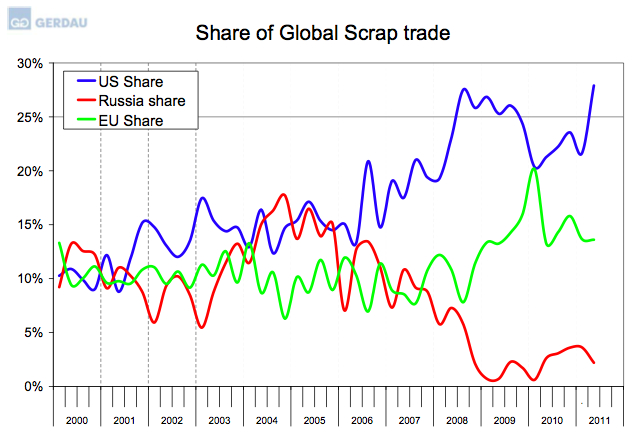 Turkey, as MetalMiner has consistently reported before, plays no small role in this share: 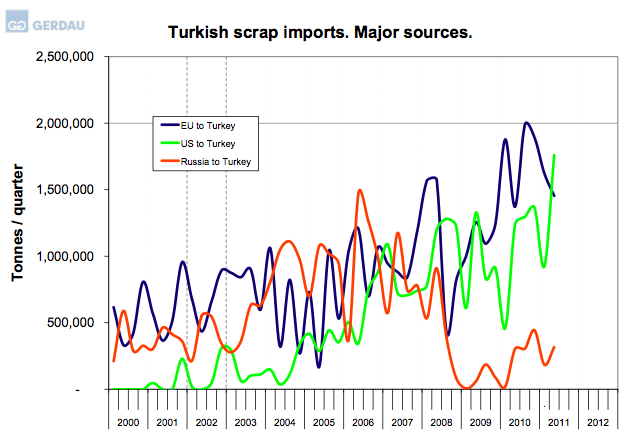 According to Census Bureau reports, US scrap exports broke a new record in August, valued at $4.075 billion. Turkey came in at fourth on the trading partner list, importing $358 million worth of total scrap, but first on the list for ferrous scrap, taking in 800,000 metric tons double the figure from the previous month.

However, that may change if Turkey continues to experience lower export volumes and revenues to their top trading partners, due to lower Middle East demand. The Istanbul Mineral and Metals Exporters’ Association (IMMIB) reported that the country’s steel exports to the United Arab Emirates, its largest steel export market, dropped nearly 18 percent from January to September 2011 (compared to the same period in 2010).

Despite US raw production numbers, domestic steel scrap prices may be on a slight downward trend. According to Scrap Price Bulletin, the composite prices for No. 1 HMS have been lowered to $408.50/gross ton  (from $416.83/gross ton last week) and shredded is down to $449.17/gross ton (from $452.50/gross ton one week ago).

Gerdau reports that sources are saying China is looking to increase its scrap consumption, even though its scrap imports have remained relatively flat in the years before and since 2009. With China’s producers still eating up iron ore like crazy (and making deals with the likes of Vale for cheaper ore amidst already-low spot prices), it doesn’t look like their scrap use will be going up anytime soon at least not until their end-use products begin reaching the end of their life cycle. And even thenÂ¦