Platinum is looking increasingly vulnerable. Net speculative length has been dropping for some weeks now and, as this graph from a Standard Bank report to investors shows, the trend has been generally down for much of this year. The net position is mostly due to an increase in short positions those investors expecting a decline in prices than a major exit of longs. This equates to a market with a weakening expectation of future prices. 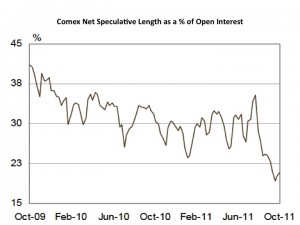 In lockstep with rising short positions is an ETF market that appears to have lost faith in the platinum market. As this graph from the bank shows, ETF holdings in platinum have been relatively flat all year after rising for the previous few: 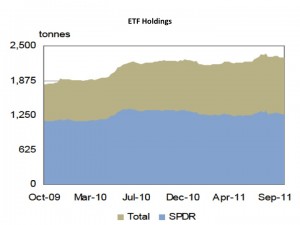 Why should this be? In spite of eurozone worries, the main drivers of platinum demand auto and chemical industry catalysts — have been relatively solid. In fact, for many other metals, such as aluminum and steel, the auto market is the one bright spot in terms of solid demand. Much of the growth in platinum demand, however, has been predicated on exceptionally strong Chinese automotive growth, a trend that has eased this year for a number of reasons. In addition to slowing auto sales growth, a report by Michelle Smith in Resource Investing News explores platinum auto catalysts demand and explains why simple auto sales numbers are not a good indicator of platinum demand.

The report states that according to the China Association of Automobile Manufacturers, auto production in China was nearly 12 million units by the end of August, a 3-percent increase on the year before. This is much below the level of domestic GDP growth in excess of 9 percent and reflects the withdrawal of 2009/2010 incentives such as the slashing of car tax on small vehicles and the double subsidy offered to farmers. These stimulus incentives boosted demand in 2009 by 46 percent and contributed to our perception that China is a small car market.

Here lies the first of our misconceptions: 12 million cars in China is not the same as 12 million cars in the US. US cars tend to be much larger saloons or SUVs requiring larger and sometimes dual catalytic converters, requiring significantly more platinum on a car-for-car basis. Devoid of incentives, the trend in China this year has been for mid-size and larger vehicles. Ford reported sales up 15 percent overall, but up 33 percent for its midsized Focus, whereas Mercedes reported “remarkable sales growth in large part because of a demand surge in their largest S-class saloons, which were up 41 percent, and SUVs up 100 percent.

China’s commercial vehicle sales, however, are down nearly 5 percent through August and production down 7 percent, supporting the more widely accepted trend that industrial growth is slowing in China, but has yet to filter through to consumption.

With the US flirting with recession and at best facing weak consumer demand while the housing market remains depressed — and parts of Europe already in recession likely to depress growth among the stronger core states next year — auto growth is not going to be strong in Western markets. Unless China decides to loosen monetary policy and re-stimulate the economy, a move they could take if growth appears to slow too much, automotive sales are not looking to be the savior for platinum that they were in 2009-2010. Many observers, Standard Bank among them, see the next move as down.