Coking and Thermal Coal Facing the End of Their Bull Run

While most commodities have suffered something of a roller-coaster ride in terms of prices, coal and iron ore have weathered the storm much better. Coal in particular has benefited from natural disasters such as the Queensland floods that removed a significant source of supply from the seaborne supply market earlier this year, and while spot prices for both coking coal and thermal coal have come off, they have not seen the swings of the more volatile base metals.

As with iron ore, however, coal demand is very lopsided. In Asia, demand has remained strong and major importers like China have had to supplement Australian supplies with coal from elsewhere. But in Europe and the US, coal producers are facing a very different market. US producers are an example. East Coast miners have been doing well — exports are at a record high.

A Reuters article quoted a U.S. Energy Information Administration (EIA) report as stating that 2011 US coal exports reached 1982 export-boom levels. Over the first half of the year, exports reached 54 million short tons, an increase of 35 percent over 2010 levels, and the EIA anticipates that exports will approach 99 million short tons by year-end. But at the same time, domestic demand is falling due to competition from shale gas for power generation and lower coking coal demand from steel mills. Consequently, central and inland coal mines are seeing sales and prices weaken. Europe is looking even worse. South African cargoes, much of them destined for Europe, have fallen to $100 per ton from up to $120 per ton earlier this year.

China, on the other hand, has remained a robust importer of thermal and coking coal. Imports reached 13.3 million tons in August from 6.1 million tons in March, as this graph from HSBC shows: 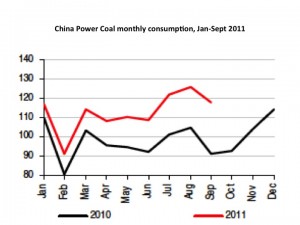 China’s not alone. The bank expects India to be the fastest-growing importer driven by thermal coal imports rising 32 percent to 79 million tons in 2011 and 19 percent or 94 million tons in 2012 in spite of rising domestic production.

HSBC believes Australian cargo prices will retreat in the last quarter and early next year as the Chinese take more coal from Mongolia and the US. Likewise, thermal coal prices should remain stable. HSBC is predicting a small decline in December, and as such, we can expect that both thermal and coking coal prices should be a little softer next year for consumers in North America and Europe. China doesn’t need to stop buying to take pressure off prices: a simple moderation in demand by focusing on “domestic supplies like Mongolia takes the pressure off the seaborne trade and, in turn, US exports.