As with all base metals, zinc demand took a severe knock post-2008. Up until then, demand had exceeded supply, and as inventory levels plummeted the metal price rocketed, as the graph below from HSBC illustrates. 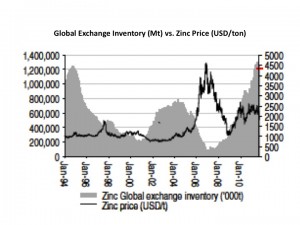 However, the peak was hit in 2007 and in a classic reverse of plummeting prices feeding through into rising inventory, the graph shows an abrupt about-face during 2008 — which only really changed as China roared back with inventory buildup across the base metals in 2009. Demand however recovered quite quickly, and this year exceeded 2007 peaks in spite of poor infrastructure demand in the West and still below-peak galvanized steel output in Western markets. The driver, of course, has been China, where construction, infrastructure and consumer goods make up two-thirds of zinc demand.

Although demand came back strongly, supply recovered even faster. After initial announcements of closures in 2008/9, mines and smelter capacity came back in 2009/10, keeping the market in oversupply as the graph below shows. 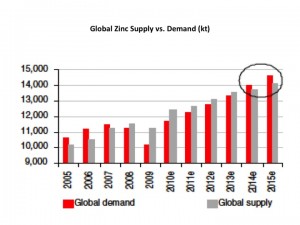 While analysts can’t precisely agree on how much the market is in oversupply, there is no disagreement that it is in surplus. Exchange inventory has risen to over 785,000 tons on the LME and over 375,000 tons on the SHFE. Global exchange-traded stocks are said to be some 7.5 weeks of consumption, a record for the last decade.

HSBC puts total world stocks of zinc at over 3.5 million tons, or 15 weeks of supply, in a recent Q4 metals report. Lisbon-based International Lead and Zinc Study Group put the supply surplus at 263,000 tons in the first eight months of this year, but the World Bureau of Mining Statistics puts the surplus at 541,000 tons for January to August this year, potentially adding something like a million tons over this year to global inventory.

On the face of it, we would expect the price of zinc to have only one place to go, but let’s see in Part Two if there is more to this than meets the eye…