Well, today — give or take — the world is 7 billion people big.

That, at least, is what the UN has been saying. The fact that the world’s population hit 7 billion is almost less astounding than the fact that it was 6 billion only 12 years ago! That means, of course, that each milestone is coming exponentially faster. The stark reality is reflected in the graphic below: 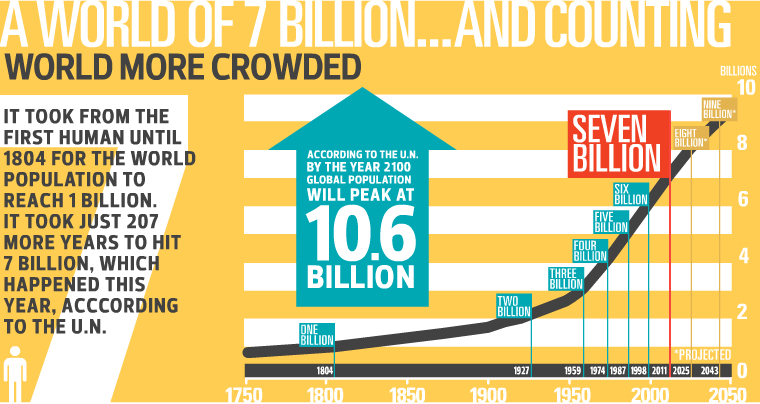 (The Economist also has a cool interactive representation here.)

Perhaps the more worrisome issue is how to stretch our finite commodities resources over the exploding population’s needs.

The obvious commodities in this case agricultural crops and water will be the most immediately strained in the upcoming decades. But how will raw industrial materials minerals, ores and oils and the industrial metals that depend on them be affected?

The FT posits that, depending which viewpoint or expert you refer to, the exclusive connection between rising populations and higher commodities prices does not always exist.

For example, Javier Blas cites a story of a $1,000 bet between conservative economist Julian Simon and ecologist and author of “The Population Bomb Paul Ehrlich. Simon bet that population growth doesn’t impact raw materials prices, and he won, based on watching the price of a basket of five metals over the 1980s.

The basket of chromium, copper, nickel, tin and tungsten actually decreased in value by $567.07 in real terms over the decade, while the population kept growing for example, it grew from 4 billion in 1987 to 5 billion in 1998.

However, the truth is that commodity prices depend on myriad factors, and population is only one small part of it. (Indeed, the basket of chromium, copper, nickel, tin and tungsten is higher in price today than it was in 1980, according to the article so if Simon and Ehrlich bet on a 30-year period, Ehrlich would be in the money.)

In order for that to happen, the folks in the emerging world will have to be fed and watered first. If they’re not, according to Blas’ conclusion, it will contribute to relatively lower commodity prices.