On the face of it, we would expect the price of zinc to have only one place to go, but intriguingly, HSBC is predicting a higher price next year and rising prices through the middle of the decade. This is because at current prices, many suppliers are sitting at the marginal cost of production. This graph illustrates the pressures producers are under and, the bank believes, will provide a floor under further price falls and dissuade new mine investment while prices remain below about $2,500 per ton. 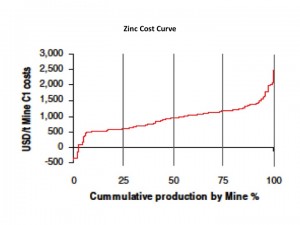 Nyrstar, the world’s largest zinc producer, said in a recent third quarter statement that all their smelting operations are profitable at current zinc prices (assuming they meet their volume targets), but that in China a number of smelters are being shut because at these levels they are not profitable. As with Alcoa’s similar comments on aluminum recently, Chinese production costs for these energy-intensive metals are relatively high on the comparative cost curve.

A recent Reuters article underlines the position, saying Minmetals Century mine, the second-largest in the world behind Teck Resources’ Red Dog mine in Alaska, is facing falling output. The mine is coming to the end of its life in just four years and although the company has a new project, Dugald River, at its peak it will produce only 200,000 tons of zinc contained compared to Century which was producing over 500,000 tons. More of a challenge for Minmetals will be their cost of production: HSBC estimates they have one of the highest in the industry, worse even than Xstrata and nearly twice that of Teck.

As the zinc market gradually recovers in terms of demand, normally conservative HSBC does not see supply increasing at the same pace. Although in the short term there is little to push prices higher, the bank sees the average price in 2012 some 10-15 percent higher at US $2,276 per metric ton (US $1.03/lb) and 2013 at US $2,664 per metric ton (US $1.21/lb) in anticipation of the market moving back into deficit by the middle of the decade.

The good news is such rises are not enough to undermine the economics of projects consuming galvanized steel in any volume, as the rise in zinc premiums would not dramatically impact finished galvanized prices, but for alloy consumers predicating projects on current prices, it gives pause for thought if even conservative analysts are predicting 40-percent cost increases over two years.