The global copper market is no stranger to excessive bouts of volatility, whether it’s driven by fundamental factors, speculative bubbles and subsequent bursts, or far-reaching financial events.

Over the past five years, however, we have experienced two periods of extreme volatility that can only be categorized as unstable market conditions. And unfortunately, we seem to be in the midst of another episode that has the potential to bring the market to the brink of inordinately dangerous risk once again.

In May 2006, following four years of above trend growth in global demand accompanied by declining inventories of copper, the price was trending steadily higher, reflecting a strong fundamental environment. During the second quarter of 2006, however, the trajectory changed significantly with the price beginning to move up as deep-pocketed speculative traders squared off in the marketplace in what seemed to be a test of financial acumen and monetary willpower that completely overwhelmed all other considerations. From $2.20 in March, spot copper on Comex soared $1.88, or 85 percent, to close at $4.08 less than two months later in May. 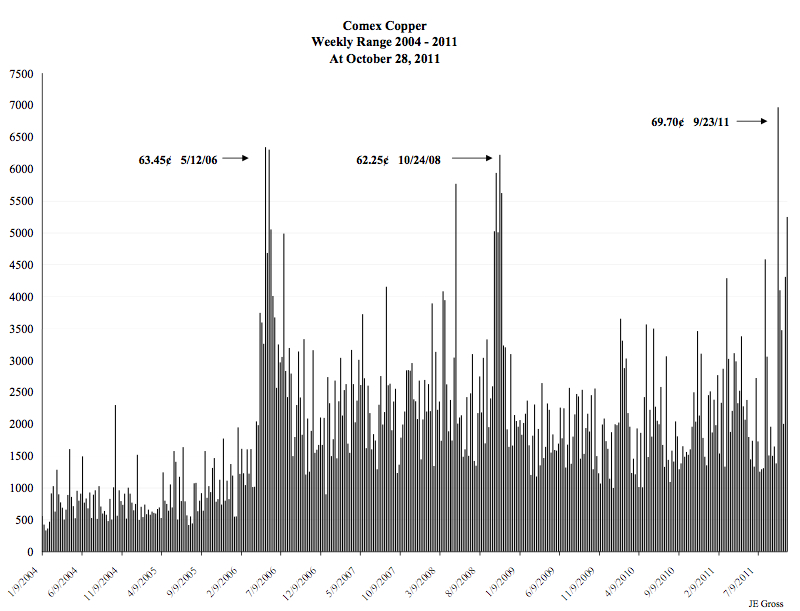 Not only did copper reach a record-high price, but we also saw record swings from gains to losses and back again as the market shifted erratically, with weekly trading ranges in excess of 60 ¢ leading up to the peak. In a final climatic showdown, however, when the weaker trader eventually capitulated, so did the price of copper, as it fell $1.23, to close out the year at $2.85.

Over the course of 2007 and into 2008, copper (and all commodities) traded aberrantly, driven by easy credit and a falling dollar, but offset by concerns of economic weakness stemming from growing losses in the housing sector that were thought to be confined to subprime mortgages.

Nevertheless, the global fundamentals for copper were still viewed as strong and declining inventories lent further support to the positive outlook. At the end of 2007, the spot price for copper stood at $3.03 and inventories held in Comex and LME warehouses totaled 211,500 metric tons. By March 2008, however, some 91,000 mt were taken off warrant, bringing the total held to just 120,500 mt and helping push the price up to $4.00 — approaching the high set in 2006.

During the first half of 2008, just as we saw in 2006, commodity prices overall (including copper and crude oil in particular) moved into record-high territory, driven by speculative trading and aided again by the dollar falling to new lows against other major currencies. Coincident with new highs being reached, and despite further signs of economic weakness in the United States, the thinking in support of this apparent contradiction was that developing economies along with and led by China’s growing appetite for industrial raw materials would have prices continuing to march onward and upward, as international competition for limited resources would persist. Indeed, with crude oil trading at $110 per barrel in March 2008 (up from $60 in the previous year), it was just a matter of time before we would see $200+/barrel oil. Thus, with the benefit of hindsight, we were blind to the hidden dangers that lie ahead.