Iron Ore Set For a Rebound

Are we seeing the beginnings of a bounceback in iron ore prices? After falling 36 percent since early September, the Platts 62% Fe iron ore price rose this week from $116.25/ton to $118.75/ton, according to an FT article.

As the graph above shows, the iron ore price has plummeted this summer as Chinese steel mills have slowed buying. Steel production has eased in China as Beijing’s credit tightening has taken hold. This graph of steel production below illustrates how declining production added to supply chain de-stocking will have worked through to significantly lower iron ore demand. 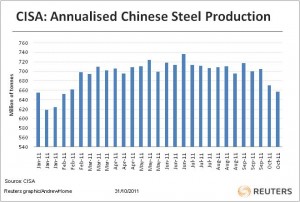 The latest figures from the China Iron and Steel Association reported in a Reuters article showed national production falling from an annualized 705 million tons at the end of September to 657 million tons in the middle of October. Supply, though, has not responded accordingly. Iron ore imports increased every month between July and September — those from Brazil and Australia were up by 14 percent and 9 percent, respectively, in the first nine months of 2011, although that was in part compensation for the 24-percent slide in imports from India, China’s third-largest supplier. Brazilian and Australian producers have continued to offer large capesize cargoes of up to 150,000 tons per vessel into the spot market.

Meanwhile, Chinese steel mills have cut back, using up high-priced stocks and deferring purchases with the result that cargoes have chased ever-falling spot prices. The existing quarterly pricing mechanism is priced on the average spot price of the quarter before prices, so June-to-August 2011 is used to set Q4 contract price levels. That will be around $175/ton, yet spot prices are currently around $118/ton. It is the widening gap between that contract price and the spot price over the past few weeks that has caused many Chinese steel mills to hold off buying any iron ore at all as they seek to renegotiate terms in favor of the lower spot price.

Further complicating the picture, spot prices have now fallen well below much of China’s domestic miners’ cost of production. Some Chinese producers have costs as high as $150-160/ton, and costs for a quarter of all Chinese supply are above $135/ton, Reuters quotes Macquarie Bank as saying. Meanwhile, Vale estimates that around 120 million tons of China’s own production is now underwater at current prices, prompting both miners and investors to believe significant cutbacks will feed through to higher import demand, eventually.

Interest has been expressed not just in a higher spot price, but also a rising forward price. This stems from the belief that as domestic iron ore producers are forced to cease production due to low prices and are deprived of Indian supply due to the imposition of export taxes and quotas, Australian and Brazilian producers will be able to achieve higher prices again next year. To what extent this bears fruit will in part depend on the iron ore producers’ willingness to show production restraint. Up to now, many of the smaller miners (and BHP among the major three) have aggressively offered spot cargoes into a falling market, fueling further falls. Arguably, market share becomes less of an issue in an increasingly spot-oriented market inasmuch as a sale lost today can be recovered tomorrow, it is not a long-term contract.

Spot-market pricing could actually work to the iron ore producers’ advantage, but having invested literally billions in new and enhanced production facilities in recent years, it will be intriguing to see whether miners give in to Keynes’ “Animal Spirits this year and next. Will they fight for every sale or will they seek to cooperate in limiting production? How genuinely competitive and open an iron ore market do we have? Watching the plummeting spot price you have to say “very,” but the answer may depend on who you ask.

PREVIOUS POST:
Is China Really All That Concerned With Illegal Lanthanum Cerium Mining?
NEXT POST:
India Looking to Upgrade Its Infrastructure