Home | Commodities | All or Nothing in Gold-Rush Alaska
Metal Appreciation

All or Nothing in Gold-Rush Alaska 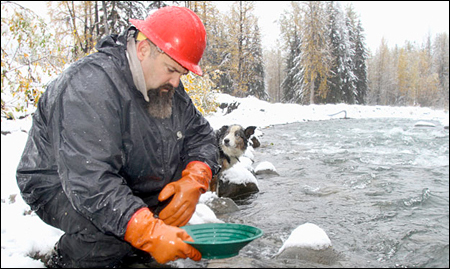 Alaska is always in a state of mining. Gold is the magnetâ€40.3 million troy ounces of it from 1880 through 2007. Southeast Alaska drew the reality TV show “Gold Rush Alaska, whose cast hails from Sandy, Oregon. Bootstrapping their ambition, six men dust off their small-town, transplanting themselves to Porcupine Creek where they undertake an all-stakes mission in major-placer gold mining. The team is led by Todd Hoffman, along with his father, Jack. They’re fiercely determined to realize their mining claim. Coupled with Gold Fever, they were driven by today’s harsh economic terrain to yet another challenging terrain. The scenes and objects of this journey are remarkable.

Teams use a “shaker” (a placer-mining machine customized in Oregon and transported to Alaska) to separate the rock material via high vibrations and water jet-streams. It’s loaded with matter to perform its function.

Then they collect buckets of “pay dirt, or gravel, capped with icy slush after a freeze, and await both mechanical and manual sifting with the hopes of uncovering fine gold elements.

One noteworthy locale is the abandoned cabin of legendary Jo “Porcupine Jo Jurgeleit, the one-legged female miner who was known to use bullets to defend her claim along Porcupine Creek. She mined from the 1930s until her eighties.

One long-standing pattern of truth: no work ensures no gain. Here’s to the Hoffmans and their crew hitting the mother lode.