The fraught investment environment that we all live in now just got rattled again last week, when MF Global, the financial broker-dealer headed by former Goldman Sachs honcho (and subsequent US senator and New Jersey governor) Jon Corzine, declared bankruptcy. Although MF Global’s situation resonates more immediately in financial circles, the company also has a stake in the metals sphere.

MF Global (who’s first two initials have always made me think of a rather unfortunate swear word) seems to have placed itself right in the middle of the post-recession recession to borrow a phrase coined by Spend Matters and market instability backfired on them. Amidst the European sovereign debt crisis, MF Global made some bets that investors were apparently not happy about, according to Bloomberg BusinessWeek. Missing money (to the tune of some $633 million) raised the CFTC’s eyebrows, and Corzine ultimately resigned, unable to take the heat any longer.

Turns out Corzine, who has a reputation for taking on massive investment risk — as he did with Goldman — and personal risk as governor (not wearing a safety belt in the passenger seat while his driver, a state-police officer, sped along on the freeway, resulting in a crash and life-threatening injuries), kept up the risky behavior with MF Global. As of Oct. 25, Bloomberg reported, the company “owned $6.3 billion of Italian, Spanish, Belgian, Portuguese and Irish debt. Ouch. I guess they bet the wrong way. 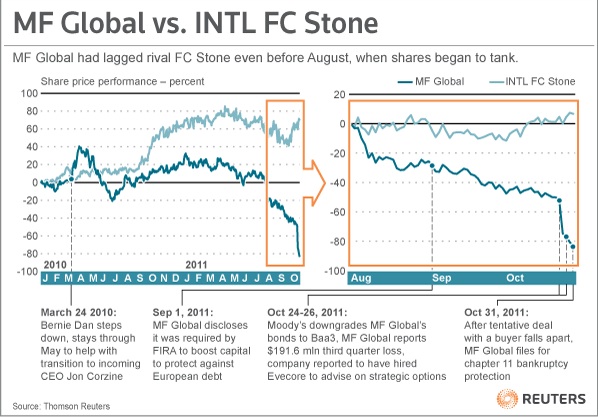 A look at MF Global’s plummeting stock performance against that of INTL FCStone. Source: Reuters

Interestingly, according to a Reuters report, the UK arm of MF Global is a “mid-size metals broker on the LME. Well, we should say “was a metals broker, as the company’s bankruptcy is forcing the team of brokers to look elsewhere. But MF had a sizable role they were one of only 12 firms with ring trading access, known as “Category 1. (“Category 2 allows all types of LME business, including electronic clearing.) Some analysts are saying that Beijing would be happy to tap into their expertise as a way to get into LME trading.

The Bank of China is reportedly already forming a commodity trading operation in London to be approved by 2012, which will have “Category 2 privileges on the LME, and the going bets are that they’ll snap up some former MF traders and brokers, according to Reuters.

“It provided futures and options market-making, brokerage and clearing services for metals including copper, aluminum, zinc, lead, tin, nickel, aluminum alloy, molybdenum, cobalt, [and] steel billet…As a clearing member of the Commodity Exchange (COMEX) and the NYMEX, MF Global provided futures and options brokerage and clearing services for copper, gold and silver on COMEX, as well as platinum and palladium on NYMEX…It also offered over-the-counter (OTC) products and contracts, including LME versus COMEX copper arbitrage.

It also turns out that MF Global owns quite a sizable stake of the LME 4.7 percent, in fact, worth nearly 3 million pounds and in the event of an LME takeover (rather imminent), MF’s stake could be worth between 16.3 million and 46.5 million. KPMG, brought in as a third party to oversee proceedings, will have to decide how to handle these shares if no one buys the bankrupt company, according to LME spokesman Chris Evans.

Yet another financial downfall story shows us just the beginning of what an international debt crisis can do, not only to one firm, but also to the entire global metals trading industry and how it relates to the broader commodities markets. Will it affect metals prices in the medium-to-long term? We’ll see, but at least we know that the Euro debt crisis has already inflicted harm on the west side of the Atlantic.