Chinese Steel Production Falling Fast: What Does It Portend? – Part One

China’s steel production plummeted in October, according to CISA data reported in a Reuters article. As this graph shows, China’s average daily crude steel output fell to 1.786 million tons in October, the lowest level since January, as steel mills scaled back production to cope with lower steel demand. 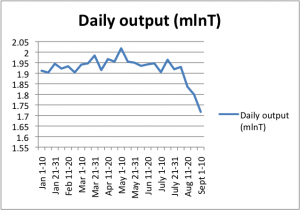 Chinese steel mills, facing lower orders and increasing inventories, are bringing forward blast furnace and equipment overhauls in the hope demand may improve in the New Year. After operating at full capacity since February, mills produced just 1.717 million tons per day in the last 11 days of October, down 4.6 percent from the previous 10 days. More mills are expected to follow as demand continues to soften on the back of a rapidly slowing construction sector.

Construction has certainly been on the retreat this year. After two years of effort, Beijing is finally having an impact on house prices as steps by regulators tighten lending and place restrictions on the buying of second homes. In spite of howls of protest from new homeowners at the sudden reversal in prices, it doesn’t look as if Beijing will make an about turn. With much praise in the official press, Premier Wen Jiabao said in a speech in Russia this week, “I will especially stress that there won’t be the slightest wavering in China’s property-tightening measuresâ€our target is for prices to return to reasonable levels.”

As the Wall Street Journal points out, real estate is a major driver of growth in China and a big source of demand for steel and cement, as well as of domestic demand for manufactured goods, such as white goods and furniture. As much as 25 percent of the Chinese economy may be tied up in real estate and related industries, according to the WSJ. The paper went on to quote JPMorgan saying that the correction in property prices is not over — indeed, it has just started and steeper declines lie ahead, although the chances of a nationwide collapse are small.

Beijing certainly seems adamant that to tackle inflation and bring prices back into the realms of affordability, prices have to come down further. Although average house prices in the country’s 100 major cities fell for the second consecutive month in October to 8,856 yuan ($1,400) per square meter, down 0.23 percent from September, according to the China Daily they are still up 140 percent nationwide since 2007 and, more importantly, eightfold in major cities like Beijing over the last eight years.

It’s not just steel mills that are feeling the effects of slowing construction. Developers’ share prices have been sliding on the Shanghai stock market as China’s second-largest developer Gemdale Corp. said its October sales slumped 38 percent from a year ago. Bloomberg Businessweek, quoting Barclays Capital, is predicting house prices will fall as much as 30 percent next year.

So does this mean a bona fide slump for China? Continued in Part Two.

PREVIOUS POST:
A Case For Changing the Way We Assess National Fuel Supplies – Part Two
NEXT POST:
Chinese Steel Production and House Prices Down: Sliding Toward a Slump? – Part Two